I'm sure you saw that the resident appointed a new chief of the Consumer Financial Protection Bureau, Richard Cordray.  This was done as a recess appointment - so that the president doesn't have to put up with that pesky senate.  Richard Cordray replaces the stunning Marxist (now Massachusetts senate candidate) Elizabeth Warren, who was appointed in a pretty stunning end run around the law herself.

If you're not familiar with this agency, the CFPB was a turd wrapped in the Dodd-Frank bill to fix the problems in our financial system by (here's the brilliant part) doing absolutely nothing about the problems in our financial system.  The CFPB  doesn't report to congress, but to the Chairman of the Federal Reserve.  Congress has no power over this agency; no financial strings, nothing.  They effectively gelded themselves and extended the scalpel to likewise neuter the judicial branch.  The law creating the CFPB removes any ability for judges to have any effect on it. An executive branch takeover of the financial sector.

But to make things really stink like old dead fish, the senate isn't even technically in recess, so a recess appointment is violation of the law! 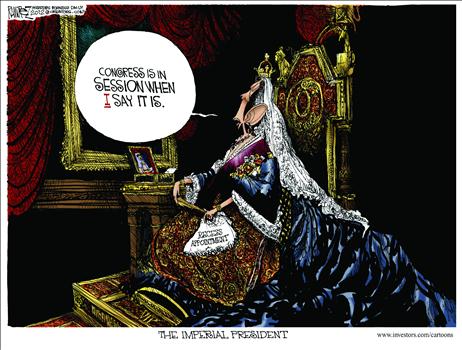 Recess appointments are nothing new.  Right off the top of my head, I remember John Bolton getting a recess appointment as UN ambassador under W, but recess appointments while the senate is in session are a new low in ethics (or a new high in tyranny, depending on how you like your dictators).  Jonah Goldberg brings the smart to a summary of this sort of politics.  It's worth reading the whole thing.


In 2007, the Democrats controlling the Senate were fed up with George W. Bush's recess appointments. Majority Leader Reid, feigning great sadness over the sorry state of our republic, resorted to the extraordinary tactic of keeping the Senate in pro-forma session so as to prevent the imperial Bush from doing an end-run around the confirmation process. The move was celebrated by liberal commentators as a brave and necessary assertion of congressional power and was supported by then-Sen. Barack Obama.

Fast-forward to this week. The Senate has once again been in pro-forma session in order to keep President Obama from making recess appointments. Reid agreed to the tactic as part of negotiations with Republicans last year.

How this works, is a couple of opposition party senators show up for a roll call or a little while every day, thereby keeping the senate in session, by law, if not by fact of actually giving each other hand jobs, or whatever they do up there.  But imperial leader Obama said this is just a sham, and declared the recess appointment.


With the alacrity one normally associates with court jesters and royal spittoon cleaners, Reid immediately endorsed the president's decision, accepting the logic that calls a maneuver he (Reid) invented a sham.

And I love Goldberg's closing words so much, I'll quote them here:


So here we have Reid, a man who tried to enter the national stage by promising to be an honorable foe of the imperial presidency and the metastasizing growth of federal bureaucracies, thriving on the national stage by enabling exactly those trends when it suits his party. And it all it cost was his honor.