Back on the 11th, I seriously contemplated writing something about how foolish the conspiracy theories sound based on even the smallest amounts of knowledge of construction techniques.  Add in knowledge of metallurgy of the level that a working blacksmith or welder gets, this video says plenty, let alone the knowledge of a working civil or mechanical engineer and they seem even sillier.  The way things fail is the subject of a high level mechanical engineering study usually called fracture mechanics.  I have a little exposure to it from an undergrad required elective, but it's a specialized area that I wouldn't pretend to qualified to talk about.  The only thing I can say with self-assurance is that when things are breaking, or exploding, they don't necessarily follow the neat, tidy little order that many would assume.  As I've commented before, humans tend to think in straight lines, and Euclidean geometry; God tends to think in partial differential equations.

Why didn't I write the piece?  Basically, I think it's a waste of time.  One of the key elements of conspiracy theories is that the people who believe them tend to believe them with a faith that won't be swayed.  People often say that if someone argues against the conspiracy theory, that person must be part of the conspiracy!  Their minds are shut, they are convinced of what they want to be convinced, and contrary evidence will not be examined.  Did you notice that I just said I don't feel qualified to talk about the complexities of fracture mechanics?  You'll note that hasn't stopped the "9/11 truthers" from saying plenty about things they're not qualified to write about.

Today, I ended up at Fred Reed's place, Fred on Everything, and he had a great piece on this very subject.  Go read.  In that piece, Fred links to the Journal of the Minerals, Metals and Materials Society's December 2001 analysis of what happened in the buildings.  It's definitely a good read.  They in turn link to an updated summary from late 2007 at the same journal.  I believe this was one of the main sources for the famous Popular Mechanics examination of what happened.

So this is not being offered here to dissuade the conspiracy theorists because that's impossible; rather it's being offered for my more rational readers who find Fred funny and a fun guy to read.  The remainder is for the readers who might be interested in the details that have been teased out of the available data. 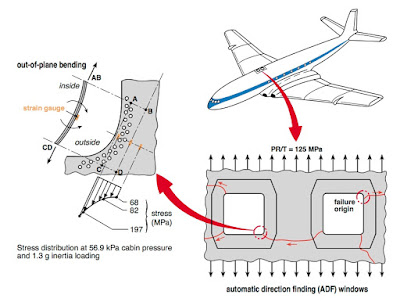 Although it's not related to 9/11, this is the British De Havilland Comet, the world's first commercial jet.  The Comet 1 crashed too often and the airplane's windows were determined to be the cause.  Mechanical analysis showed that the square windows caused concentrations of stress from the flexing of the aircraft in those corners; what we now call stress risers.  You'll note (if you haven't already) every jet you get on today has rounded window corners.  This is why.