T-24 Hours and We're Half-Hunkered Down

We've been in and out of the hurricane's projected impact path like being in the cross hairs of a drunk holding a rifle. Currently it looks like we'll get the storm, but it won't be much of one.

So we're half-hunkered (maybe half-assed hunkered).  I haven't taken down my antennas, but we've put the shutters on the windows on the North and East sides of the house.  Those get the strongest winds in all of the hurricanes we've been through.

Isaias will be the earliest hurricane here since Erin in 1995.  That was a category 1 hurricane that came ashore at Vero Beach, Florida, August 2nd, 1995.  Because of the path shape, we were in the strongest winds of that storm for the entire passage.  I was on a business trip for my second to last employer, the place I call Major Southeast Defense Contractor, and we had flown out on August 1st, to survey a couple of crystal oscillator vendors in the northeast.  I missed the storm entirely.  Even had a hard time coming home because the airport was shutdown.

As of the 5PM update, the National Hurricane Center posts this forecast map. 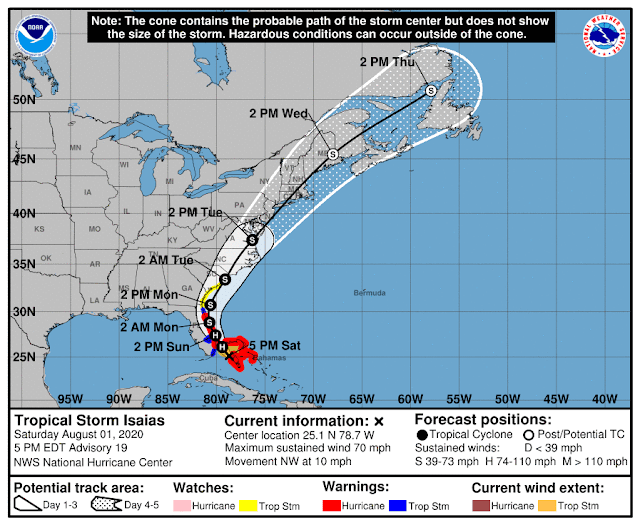 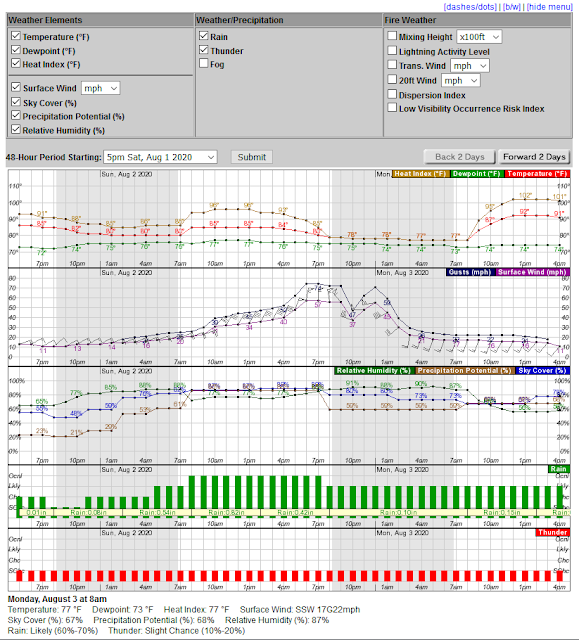 It says the worst of it will be Sunday afternoon from 5PM to 1AM, with continuous winds never going above 60 and gusts staying below 75.  Hurricanes are defined by continuous (one minute) winds of 75, not gusts.

All in all, it just looks like a rainy day, a good day to stay inside.  While the power in our neighborhood has been getting flakier as it ages, there's no reason to expect to lose power.  Oops.  I shouldn't say that...