What Happens If Maria Meets Jose?

As most of you know, while Hurricane Maria has made all the news today as almost certainly the strongest hurricane in the modern era to hit Puerto Rico, Tropical Storm Jose was sitting off the mid-Atlantic coast as it has all week, aggravating fishermen while exciting surfers.  A storm only sits in one place due to a lack of steering currents, which means the large scale movement of air masses has halted in that area.  A strong low behind a cold front would fling Jose out to sea.  A strong high would fling it into the coast.

The model runs on the two storms are a study in contrast.  The model runs out to 5 days for Maria show strong agreement that it continues on a more northerly course, paralleling the coast while staying well offshore at least through the 5th day.  The model runs for Jose look like a cat horked up a hairball or someone threw a loose handful of yarn on the map.  A handful of models bring it onshore the Delmarva peninsula, and another group shoves it opposite that, offshore.  Others send it to New Jersey, Virginia, Pennsylvania or most anywhere.

With my lame photoediting  skills, I combined the NHC plots for both storms into one graphic.  The scales they use are slightly different, so I made them line up around the Outer Banks, NC. 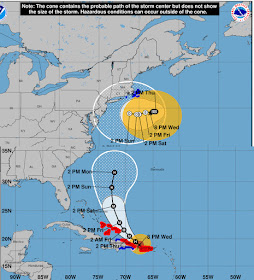 Simply, both of these can't continue as they are for a full week.  Something's gonna give.  In these plots, it's helpful to remember the stippling means that the storm can be anywhere in that area.  Maria's 5-day location covers what looks to be roughly 500 miles, consistent with the accuracy of about "100 miles per day" that the old forecasters claim.  Jose, though has an oval of uncertainty that looks to be 800 miles or more across - from onshore anywhere from Virginia to New Hampshire,  to still at sea, a bit east of where it is right now.

So what happens?  There is an uncommon phenomenon called the Fujiwara Effect, named for a Japanese meteorologist, in which the storms start to circle each other and then spiral into each other, becoming one storm.  At their closest - in this plot - they look to possibly be within a couple of hundred miles. With tropical cyclones, they typically interact within about 850 miles, according to that Wikipedia article.  They are absolutely going to be that close to each other, that is, according to tonight's models.  The Fujiwara interaction happens on occasion in the Atlantic basin, but not often.  We may get to see it.

To me, what hurricanes "decide" to do is like whatever two consenting adults decide.  I don't care if they check into a Motel 6 and merge repeatedly.  As long as they keep their Fujiwara-ing away from anyone else, and don't hurt anyone while they're at it.