Now That That's Done For Now

The emphasis for the last couple of days was the spring planting, but not veggies (except for one more tomato plant); it was our decorative bed in front of the house.  The old hibiscus bushes I mentioned in my last post were likely 37 years old and hardly alive.  We cut them down and pulled them out, after a trip to the Lowe's for some replacements.  I don't have any before pictures but they were scrawny sticks with a handful of leaves on them.  We got three replacements and a couple of others. 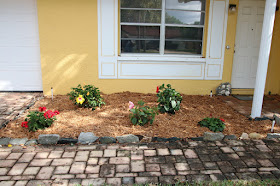 It was a lot of work, but we planted the first two last night after dinner to take advantage of the evening cool down, then were back out this morning at sunrise to do the rest.  We were done by 10 AM.

There are still two that are about the same age in a different flower bed, but they look better.  We'll give them a bit more water and food, and see how they do this summer.


As I've been trying to troubleshoot my dead oscilloscope, I've gone back to a forum I'd never heard of over and over,  EEVBlog.   Those of you with similar interests might find it a worthwhile stop, too, or already have.  I decided to look around a bit and see if it would be worth my while to join the forum, and stumbled across a thread on leaking alkaline batteries, which we've talked about here before and got a lot of interest.

The conclusion of the commenters is that both Duracells and Energizers leak far more than they used to, but after that it's speculation on reasons and different views on alternatives.  One of the comments that bears what research I can do (perhaps by buying some) is that the big two are competing on image and perhaps some specsmanship about capacity, while cheap batteries aren't trying to win on capacity but rather on cost.  In the fight for being able to claim better capacity, they may squeeze the room in battery too much and leave out critical elements, such as not leaving enough space for the compounds that remove excess hydrogen that the battery produces during discharge.  It leads to the conclusion that the cheaper batteries may be better.

Consensus is that lower tier brands like Kodak, Sunbeam, Fuji, Panasonic and Sony make good alkalines that don't leak as often, and that Panasonic's Eneloop NiMH (Nickel Metal Hydride) rechargeable batteries are a good substitute.  I have eight  Eneloop batteries for a couple of radios I use regularly and they do seem to be better than the non-branded NiMH batteries I've used.

I'm not in a position to start replacing all the alkalines in the house with Eneloops, I don't even know how many there would be to replace, but I think I've bought my last Duracells.