Two Space Records - One We Watched, One We Read About

This morning, precisely on schedule, SpaceX Falcon 9 booster B1049 lifted off from Cape Canaveral Air Force Station Launch Complex 40 (also called "Slick-40").  We had a good view of the launch this morning as the clouds held off a bit longer than most mornings lately.

It one sense, it was a routine flight for SpaceX, the 10th Starlink mission carrying 58 Starlink satellites and three rideshare Skysat payloads from Earth observation company Planet.  In another sense, it was noteworthy: it was the record sixth launch and recovery of an orbital-class booster and since they're the only company doing that, undoubtedly the first time in human history.  It was also the 99th flight of a Falcon 9.  You can watch as much of the launch and booster recovery as you'd like here. 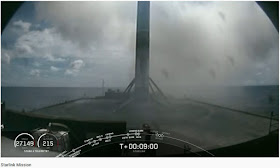 About 20 seconds after B1049 touched down on recovery drone OCISLY (Of Course I Still Love You), the smoke cleared well enough to grab a quick shot, with the booster almost centered on the SpaceX logo on the deck.

The other record was set for the Raptor engine, the engine that will be used exclusively on their Starship and Starship Heavy vehicles.

On August 17th, the SpaceX CEO unexpectedly released a photo of a Raptor test and a corresponding graph showing the engine’s chamber pressure, confirming that the company had successfully pushed the engine to record-breaking levels. Musk says that an unspecified Raptor – possibly serial number 39 (SN39) – briefly reached a main combustion chamber pressure of 330 bar (~4800 psi) during a controlled burn – and remained intact after shutdown.

Outside of subscale laboratory tests, the highest main combustion chamber known to full-scale, orbital-class rocketry was achieved by the Soviet Union in the 1980s with the RD-701 engine. Although the exceptionally unique engine was canceled before it could be used, it reportedly reached pressures of 290-300 bar in one mode of operation. Now, however, SpaceX and its Raptor engine appear to be the new world record holders – and by a huge margin.

In a world where small differences in performance are fought for, a 10% increase over the previously highest-ever recorded chamber pressure is certainly worth noting.  For comparison, the Rocketdyne F1 engine that powered the Saturn V had a chamber pressure of 70 bar.  The F1 engine was gigantic and used that 70 bar (1015 PSI) to achieve 1.52 Million pounds of thrust.  The Raptor is smaller and looking at half a million pounds of thrust.  That just means a vehicle needs three times as many Raptors as F1 engines.  The Saturn V had five F1 engines; Starship Heavy will have 30 Raptors (last I saw). 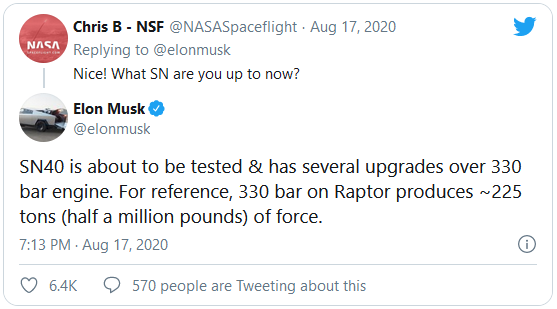 Considering the goals for the uses of the Raptor, the real design goals should emphasize reliability.  Starship is intended to go far beyond low Earth orbit, to the Moon or Mars.  The booster (Starship Heavy) returns for reuse, the upper stage (Starship) gets it into orbit then burns again to get onto the trans-Mars trajectory.  Starship itself has three Raptor engines.  There will probably be a burn or two along the way for trajectory correction.  At the worst case, seven or more months later, the engines burn again to brake it and either land or go into orbit around Mars.  Teslarati notes not being sure a single Raptor has burned for more than 90 seconds.  Whatever the longest burn time intended for the engine is, they should run it that long, and then life test one.  Would it be insane to put one in a thermal-vacuum chamber and leave it for seven months, like the satellites on the way to Mars now are experiencing, before restarting it?  Simply, combustion chamber pressure is wonderful but doesn't mean much if it takes too much life off the engine.  Engine longevity, burn duration limits, and reusability without rebuilding it seem to be the hard goals - hard in the sense of difficult to achieve and the sense of little or no room for compromise.  Design margin is a wonderful thing, so if they really need 300 bar and can get 330, that sounds good.