A Ham Radio Series 24 addendum - The Supply is Finished

The power supply I discussed yesterday is finished and working.  I've hung an oscilloscope probe on the 5V output and watched it.  There are some spikes far beyond the frequency response of the regulator, possibly being picked up from the air by the scope probe.  There are no drops of the 5V supply that I can find.

First, an overall view as it's used.  If you look between the bottom of the aluminum channel and the benchtop, you can see some red spots.  One right below each of the corners and one below the switch in the middle.  In the old days, I would use rubber peel-and-stick feet.  This time I printed 1/2" on a side cubes and glued them to the bottom of the channel with superglue. 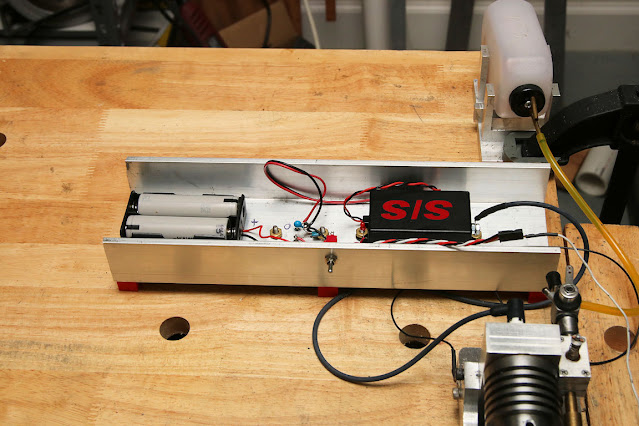 And a closeup of the voltage regulator.  I added a fairly big electrolytic capacitor (330uF) on the output pin after this picture just to try to ensure no drops in voltage are an issue. 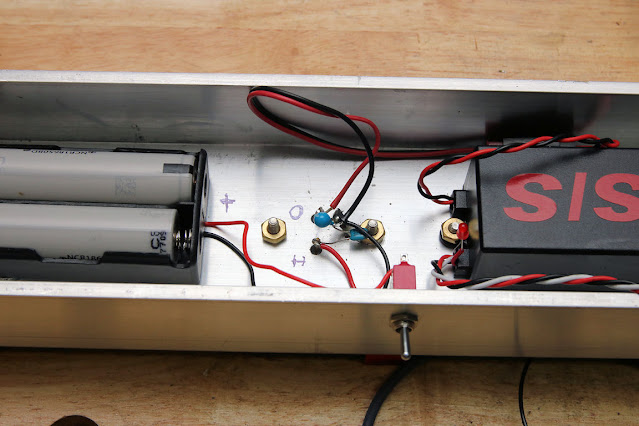 That writing near the brass nut is sideways.  The pin closest to this edge is I for the input, not H,and I'm sure you can figure out what the O is for.  There's a ground solder lug under the middle brass nut amid those parts and wires, where the two black wires and capacitors (blue) are grounded.  It was difficult to decide which way to mount the S/S module; this orientation or rotated 180 degrees because there are drawbacks to both orientations.  This one makes the LED close to the body of the S/S module rather difficult to see the way I'm using it.  On the other hand, the spark plug and ground wires are on the right, close to the end of the tray and where they're going.  Closest to the bottom side of the channel on the right is a twisted bundle of red, black and white wires.  The white wire is an input from the engine's points (or Hall Effect sensor) which comes in on the right, too.

Part of the idea of making this project is that it can be moved to another engine and I build it once.  The power switch (middle, front) is in the ON position in these pictures.  An LED to show "power on" might be a good addition.