Within the last couple of weeks, I decided to look into printing internal threads.  The first thing I found is that most people either use threaded inserts or they'll mold a hex-shaped pocket to hold a standard-sized nut that snaps into the pocket.  Still, there are plastics that can be tapped essentially like we'd tap metal.  If I wanted threaded plastic, I could print a cylinder with high enough fill rate that it comes out essentially solid, drill a hole in it and tap it.  Or I could print a cylinder with a hole the diameter of the drill bit that I'd use to prepare aluminum for tapping.  That would eliminate one manual step; why not go one step farther and print the internal threads?

Right now, the defaults in my slicer software are to print layers 0.2mm thick (just under 0.008"), so think about what the thread would look like sliced like that.  The print head will be moving in or out with respect to the center with every layer, and it's possible there's a discontinuity - a little skip or jag from layer to layer.  That made me think that it would interesting to test this with a thread that's at least 5 or 6 times the layer thickness. 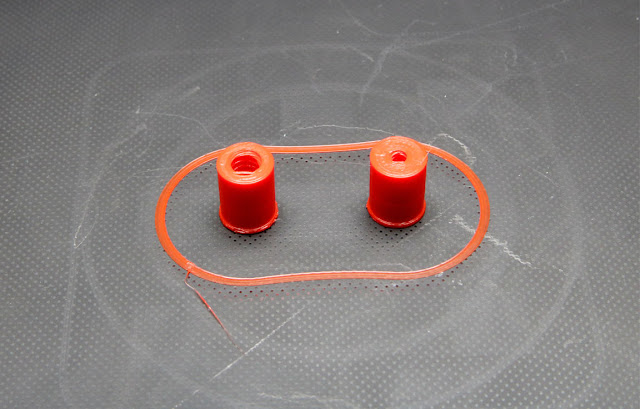 These are the first two pieces before removing from the printer.  If you look into the one on the left, the 1/4-20, you can see what looks like a flat on the side of the hole closest to the camera.  Now strain a little and see the same feature on the right.  Look a little closer at the ends on the print bed and you'll see a rim that's wider than the rest of the piece.  I don't really understand that, but that's secondary to them being the wrong size.

I've built three CNC systems, two mills and a lathe, and the first step before running a program was to calibrate the systems in the motion controller.  You tell it a calculated number of steps per inch, then test how far it goes by putting a dial indicator on the tool and telling it to go 1.000".  For example, if you use a common 200 step per revolution motor, you combine that with the number of turns of the lead screw to move 1.000"; for the .050 inch per turn lead screws on the Sherline, you multiply 200 steps per turn times 20 turns, to get 4000 steps.  When it doesn't go 1.000", you scale your numbers to make it match.  I can find no way of doing that for the printer, so I scaled up my drawings by 2% and reprinted.

That did it.  When I tap a hole in metal, the last steps I take are to get any metal chips from the threading out, and verify it by cleaning out the threads with a screw.  The two parts were tight, but both of them worked fine after I ran a screw through the length of the part, which removed some plastic slivers from the inside. 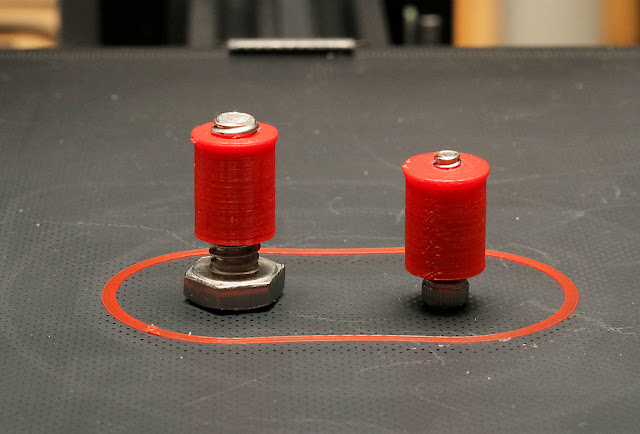 The trick to this view is the wider rim is at the top.  I started threading from the top end.  For scale, those cylinders are supposed to be exactly 3/8" OD.  Scaling got them closer.

The word of the day is calibration.  I never really checked anything I've printed so far, but I've noticed that wider area on the bottom (printer bed) before.  The software equivalent to where I did the steps per inch calibration I was describing above is built into the printer. The wider rim doesn't show up in the Cura slicer software I'm using, so some more troubleshooting of just what's going on here is next on the agenda.

Oh, and it's worth ending on this note. While these would work as plastic standoffs for something like a circuit board in a home project, and they cost about a penny's worth of filament each, I think it would be a better use of resources to buy a bagful of standoffs from some company.  The place for this might well be replacing a standoff in a vintage piece of gear (radio, audio, video...) that broke.  Then design one to match as best you can.