Just under a year ago, last April 30th, NASA selected three contractors to begin initial development of lunar landing systems that will take astronauts back to the surface of the Moon by 2024.  The three teams and their contracts were the Blue Origin "National Team" of big names in aerospace with a $579 million dollar contract, Dynetics, a defense contractor with a $253 million contract and SpaceX with a $135 million contract.  That amount is 23% of the Blue Origin team and 53% of the Dynetics contract, so smaller by far than the competitors.

Today NASA announced that SpaceX is the sole winner of the next phase contract to provide a lunar lander to the Artemis program.  That lander will be a variant of the Starship that we've been watching go through development for over a year.


"We looked at what’s the best value to the government," said Kathy Lueders, chief of the human exploration program for NASA, during a teleconference with reporters on Friday.

NASA said it will award SpaceX $2.89 billion for development of the Starship vehicle and two flights. One of these missions will be an uncrewed flight test of Starship down to the lunar surface and back. The second mission will be a crewed flight—the first one of the Artemis program—down to the Moon.

NASA pointed out several advantages of the Starship; a spacious cabin for astronauts, two airlocks, and ample payload capability to bring large numbers of experiments to the Moon and return samples to Earth.  They also liked innovative design and the fact that the base Starship is being designed to land on Mars, something also in NASA's long range plans.

I suspect that they also liked that SpaceX has plunged ahead on development of the Starship out of their own pockets.  Something about "putting your money where your mouth is" as a sign of commitment.

The news article on Ars Technica (second link) points out something that had gotten past me in the news.


For the current fiscal year, NASA said it needed $3.3 billion in funding to meet the goal of landing humans on the Moon by 2024. Congress provided just $850 million, and as a result, NASA acknowledged that 2024 was no longer a realistic target. 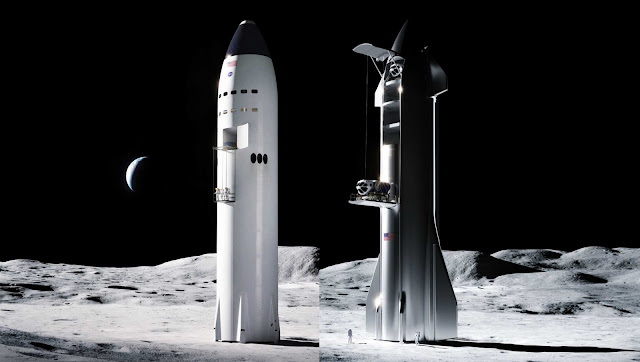 A SpaceX montage from my February post reporting that SpaceX had prototyped the elevator shown on the right. You'll note the Starship on the right isn't painted and has fins - more like SN15 than the painted ship on the left.

The big, fat elephant in the room is that current plans are for NASA to launch astronauts in an Orion capsule on the Space Launch System, but SpaceX has openly talked about launching astronauts to the moon on a Starship lifted by the Heavy booster.  The mission plan is to launch them to low Earth orbit, refuel from another Starship, then go to the moon.  Why couldn't NASA do that?  If NASA is strapped for cash, canceling the SLS seems like low hanging fruit.  It's interesting that NASA is studying the program's affordability and whether or not they should keep funding it.

Congratulations to SpaceX, who coincidentally just ended an effort to raise more funding, having raised $1.16 billion.