SpaceX Getting Back to Normal at Boca Chica

Work pace and operations appear to be getting back to normal at Boca Chica.  At 6:45 CDT, someone tweeted to Elon Musk "How's the investigation into SN11's RUD going." Elon replied with this: 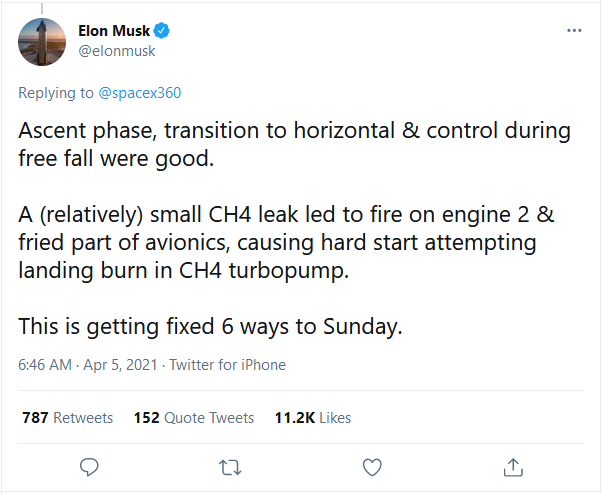 
... it’s possible that the “small [methane] leak” Musk has blamed for SN11’s failure was visible on Raptor engine SN52 less than 30 seconds after Starship lifted off, leaving plenty of time for a high-pressure fire to severely damage the faulty engine and its adjacent partners. The SpaceX CEO says that the resultant fire “fried part of [the] avionics” controlling one or all three Raptors, “causing [a] hard start” that damaged or destroyed one or all of the engines when they attempted to begin their landing burns. 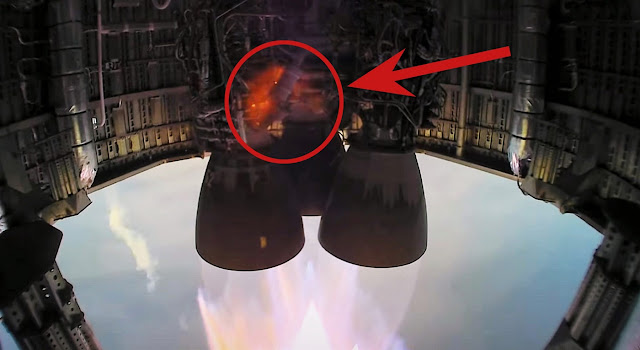 This is the picture that Eric Ralph says is at 52 seconds into the flight.  It doesn't look like a methane/oxygen torch in this photo but if that fire was burning while the engines were supposed to be off, until 5:49 when telemetry cut off, that's almost five full minutes of flame impinging on something.  Is this grasping at straws for an explanation?  I don't know.

This morning, they rolled Bluto The Crane to the test stand area giving rise to thoughts SN15 would follow this morning or tomorrow.  The surprise was that a piece of Ground Support Equipment, obviously a tank although I can't tell what kind of tank it is (other than "big"), was rolled to the test stand area and is being put in place.  The tank looks as big as a Starship prototype. 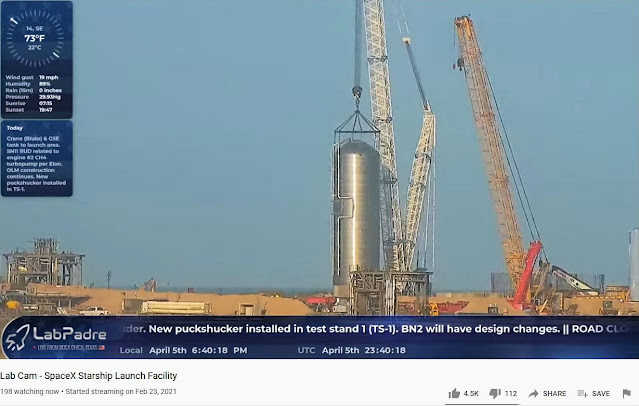 I want to call your attention to the far left of the picture: that's Test Stand 1, and it has been modified since you last saw it.  A thrust puck tester (what the scrolling caption calls the "New puckshucker") was installed over the weekend during the night shift.

The thrust puck is the name given to the base of the bottom tank in the Starship, the liquid methane tank.  The reaction force of the three raptor engines, potentially as much as 1.5 million pounds of thrust, pushes upward on the thrust puck and the bottom of the tank.  In the early days of the Starship prototypes, SN01 and SN02, a failure was traced back to the thrust puck.  It seems in their testing plans for SN15 they're treating it as completely new and going back to the very first tests they ever did.  This tester will press on SN15 before it has any Raptor engines installed.

Today's fun fact is found by looking at that link on testing the first two Starship prototypes.  That was 13 months ago: March 3, 2020.  It seems like ancient history because of the pace they build and test at.

With no road closures announced on the Lab Padre scrolls at the moment, it doesn't look like SN15, fully stacked and apparently ready to roll, will go to the test area tomorrow.  The week is young; it might well be on Test Stand #1 by Friday.