Starship SN15 on the Stand - Testing to Begin Soon

As expected, since my last update, SpaceX arranged for a road closure this afternoon, rolled SN15 to the test area about 1 mile from the High Bay, lifted her onto the test stand, and is busily completing the preparations to begin testing.  In this screen capture from Lab Padre camera 6, a worker can be seen standing between the base flaps, while others work on the test stand to the right of him. 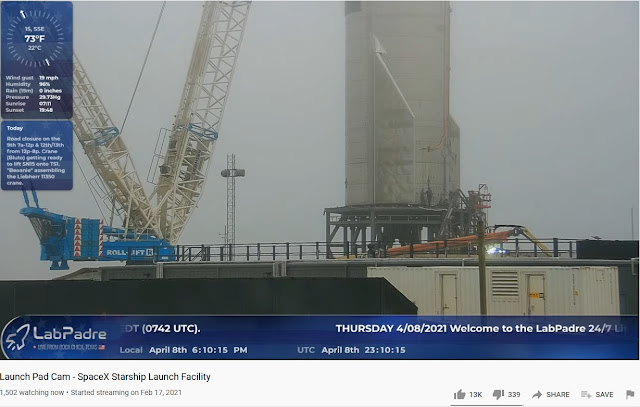 For those keeping track, SN15’s pad arrival comes just nine days after Starship SN11 – the last in a batch of four first-generation prototypes – exploded in midair some 30 seconds before a planned landing.

One of the questions that pops up in the comments window on Lab Padre is about what happened to numbers 12 - 14.  Think back a whole three months to December of '20 and Starship SN8’s unexpectedly successful test flight, a flight which Elon had said he expected to have a 30% chance of being successful.  Instead, the rocket made it just a dozen or so seconds away from soft landing after more than six minutes in flight, including two minutes free-falling in a belly flop like no rocket ever.  After that milestone, SpaceX made the decision to scrap Starship SN12 and kill SN13 and SN14 before assembly could begin.  Effectively a gamble that SN8-SN11 would produce enough of a foundation for future testing to start off on, it’s hard to say if that gamble paid off.

Tomorrow, SpaceX has reserved a road closure from 7AM to 12PM and included closing the beach, unlike today's road closure to move SN15.  That probably implies they'll begin testing tomorrow, probably with ambient temperature nitrogen to check the Starship's complex plumbing.


Wednesday, we were treated to another launch of 60 Starlink satellites onboard a Falcon 9, this time from Complex 40 at Cape Canaveral.  These launches are becoming boringly routine, just as everyone would like them to be, and I watched from launch through the first stage cutoff and jettison.  When I came in, the display was anything but its normal, boringly routine.  The view I'm accustomed to is a split screen with the views from the first stage on the left and a view of the second stage engine, glowing red, on the right.  Instead, there was one view, of mostly blue sky and a tiny fuzzy spot that was presumably the second stage still lifting toward orbit.

Suddenly, the video popped on, startling the people announcing the launch.  It was moments until the second and final burn of the first stage, and the view in front of the camera was, again, light blue.  Within seconds, though, I realized that was the ocean and caught a glimpse of the recovery drone ship coming up fast toward the camera.  Within seconds, the successful landing was captured.  There's a continuous loop of the last 20 seconds of the booster's flight on NASA Spaceflight's Twitter account.

This is the seventh flight and landing of booster B1058, arguably the most famous booster in SpaceX history, because the first flight of this one lifted Bob Behnken and Doug Hurley on the Demo 2 mission last May, the first manned launch from the US since 2011.  This was the 79th successful booster recovery.

The launch also marked the 10th SpaceX mission of the year; and being just past the end of the first quarter of '21, that puts them on a path to close to 40 launches for this year.  The calendar is clear, though, until the next launch, which will be the Crew-2 mission, taking four more Astronauts to the ISS, No Earlier Than April 22nd at 6:11 AM EDT.  Crew-2 will be the first manned spaceflight in history to fly a recovered booster.  Booster B1061 was first used for the Crew-1 launch in November of '20.