The Age of Reusability in Space is Dawning

Yesterday's post was on how SpaceX began the era of reusable boosters and completely upturned the existing paradigm of "use once and dump the rocket" that had been in place almost exclusively since the earliest days of the space program.  The obvious exception is the Space Shuttle, which recovered the orbiter and solid rocket boosters but still never achieved its goals or met the lofty promises it was sold under.  During the selling of the program, it was argued the Shuttles would bring the cost of launch to $25/pound.  They ended up missing that goal by a factor of 1000; that's right, $25,000/pound.

Last February marked the first example of extending the life of a satellite, when Northrup Grumman's Mission Extension Vehicle 1, MEV-1, successfully docked with an Intelsat satellite (IS-901) and brought back into serviceable life.  The spacecraft was launched in 2001 and was pulled from active service in December 2019 as it ran low on fuel.  Operators commanded the satellite to move into a "graveyard orbit" farther out than the unique geostationary space, as is the established way of handling satellites that have outlived their usefulness.  This wasn't refueling on orbit, IS-901 wasn't designed to allow that.  Instead, MEV-1 docked with the "disposed of" satellite and pulled it back down to the geostationary orbit, bringing it back to life.

Last week, a second Northrup Grumman satellite, (MEV-2) slowly approached and captured another Intelsat satellite, 10-02.  Unlike the first operational capture, this satellite was still in service at the time, not in a graveyard orbit, delivering broadband and other media services across Europe, the Middle East, and Africa.  The satellite, though, was running out of the fuel it needs to adjust its orbit periodically.  It was nearing time to push this one into a graveyard orbit.

This was all planned well in advance, and MEV launched last year.  Like its predecessor, MEV-2 was launched into a lower orbit and slowly moved outward by electric propulsion until reaching it's goal.


Jean-Luc Froeliger, vice president of space, space systems engineering and operations for Intelsat, said the cost of servicing is far less than the value of five additional years of satellite service. Waiting five years will also allow Intelsat to replace the 10-02 satellite with a more modern, efficient vehicle. "For us, it's win-win," he said during a teleconference with reporters. "This extension for 10-02 is very valuable to us."

Like the mission last year, this isn't refueling the satellite.  When these satellites were launched, the concept of being serviced remotely on orbit didn't exist.  Instead, the MEV docks with the target satellite and forms a single larger satellite.  That arrangement is for the five years mentioned above.  At that time (if still working; if not, sooner), the satellite will be pushed into the higher graveyard orbit. 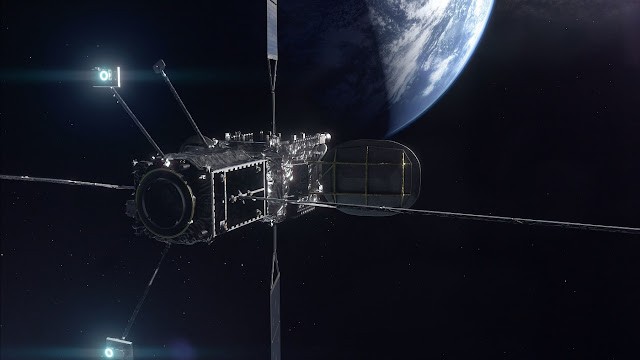 The source article on Ars Technica reports that Northrup Grumman is experiencing increased interests from commercial and government satellite owners. Tom Wilson, a vice president at Northrop Grumman and president of its SpaceLogistics subsidiary says interest from various governments is increasing. "We’re on the cusp of some bigger initiatives with them."


In 2024, Northrop plans to launch a "Mission Robotic Vehicle" that can provide basic inspection and repair services and deploy mission extension pods to satellites. After this, the company plans to develop refueling capabilities and debris removal from the vicinity of high-value satellites. Finally, in the 2030s, the company intends to begin in-orbit assembly and manufacturing capabilities.