I wasn't watching closely enough to tell you day, hour and minute this happened, but within the last month, the national debt of the US exceeded $30 trillion for the first time.  The number as I write is the upper left box in the biggest font; for those who think seeing all the numbers conveys the size better than just saying "the T word." From our friends at US Debt Clock. 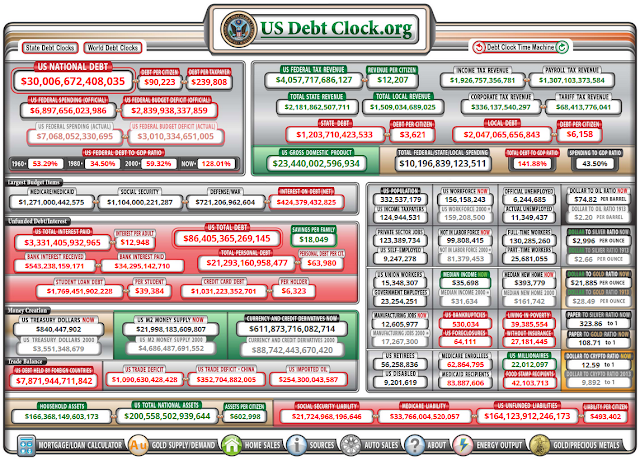 Does that seem overwhelming?  We hit $15 trillion on November 17, 2011, which says the first $15 trillion in debt took 222 years and the second $15 trillion took 11 years.  Yeah, I'm leaving out details on the months here.  I don't know about you but that makes me feel worse, not better.

Getting back to the current $30 trillion number, The Peter G. Peterson Foundation points out that the total debt is bigger than the economies of China, Japan, Germany and the United Kingdom added together.  When people talk about the Chinese funding our national debt, there's a little bit of truth there; I mean they have some amount of US bonds but no nation can buy more debt than their own entire GDP, they can only buy a few percent of it as bonds.  In fact, China, Japan and the European Union are the biggest holders of our treasury bonds except for one buyer.

The biggest buyer of the bonds to fund our government is ... us.  More precisely, the Federal Reserve Bank, which creates the money to finance our debt out of (thin air, unicorn farts, whatever words you'd like).  This would be like you writing yourself a check to double your pay and putting it in your checking account every payday.  Except for the part about that one you wrote would bounce to the moon and you'd end up in deep trouble.  And if you listen to the economic geniuses running the country, like AOC or Dr. Stephanie Kelton, it's perfectly fine for a government to print all the money it wants.

Listen, I've posted on this topic many, many times, and I'm as tired of writing about it as I'm sure most people are of hearing about it.  Let me just put some brief highlights here:


Most people don't understand exponentials.  We are in a phase that is exploding toward infinity.  It simply can't continue, that's mathematically impossible.  Worse yet, large segments of society howl like they're being fed into a wood chipper if the fed.gov simply doesn't give them more every year, let alone actually cutting their free sh*t.

And this is why I think an economic collapse is inescapable.