The Strange Reality of Hauser's Law

While writing last night's piece on Elizabeth Warren's tax plan, my natural inclination was to reference Hauser's Law, because I've referred to it at least a dozen times over the years.  I initially looked up some of my old pieces but didn't want to just go to those, but I really preferred a reference site in case the idea is new to some of you.  I found that most of my old links didn't work.  One thing led to another and I eventually searched for the topic at one of those old links and found a fresh article, from the beginning of this year.  Even better!

To begin with, economic laws are different from physical laws.  Physical laws simply can't be broken despite what car commercials may say to try to convince us otherwise.  Social science laws are broken all the time; I've said before the only so-called law I've come across that comes close to the character of physical law is Supply and Demand.  “Ironman” at Political Calculations calls Hauser's law "one of the stranger phenomenons in economic data".  When first noted by W. Kurt Hauser in 1993, he observed:


No matter what the tax rates have been, in postwar America tax revenues have remained at about 19.5% of GDP.

It's hard to see how this could flow from quantum physics or electro-weak unification theory, so we're left to take it as simply an observation rather than as rigorous as physical law.  It's more puzzling because of how much the top tax rates have varied.  Political Calculations provides this analysis of the data, with an explanation.


In 2009, we found total tax collections the U.S. government averaged 16.8% of GDP in the years from 1946 through 2008, with a standard deviation of 1.2% of GDP. Hauser's Law had held up to scrutiny in principal, although the average was less than what Hauser originally documented in 1993 due to the nation's historic GDP having been revised higher during the intervening years. [Bold added: SiG.  Also: note that the original text reads 17.8% in the first sentence.  Every other reference in the article says 16.8, so I changed this one to agree with the rest of his post.] 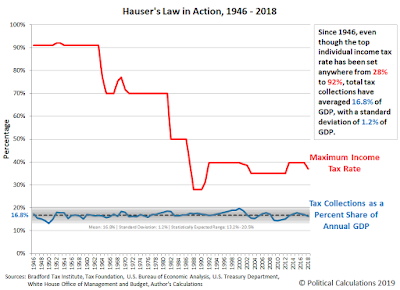 The red line indicates the highest tax rate, which you can see peaked at 92% in the early '50s and has been as low as 28%.  The blue curve, embedded in a gray band at the bottom shows the tax revenue as percentage of GDP.  The gray band is familiar to any of you who have worked with statistical quality assurance techniques: it's the + 3 standard deviations band, which ranges from 13.2 to 20.5%

A little diversion on these tax rates is in order, but space is at a premium.  A long description is here; a short version is that while we have seven tax brackets, when the top bracket was 92% there were 24 brackets.  The highest rates were only paid on income over $3.2 Million - adjusted for inflation.  Today, the top tax rate has dropped to an income under $500,000.  The top tax rate dropped from 90% to 40%, a factor of 2.25 while the income that required paying that rate dropped by a factor of 6.4.  That means many more people are paying the top rate than in the '50s.

It's interesting to see that individual tax collections have only been about half of that revenue.  The mean of individual income tax collection is 7.6% of GDP with a standard deviation of 0.8%. 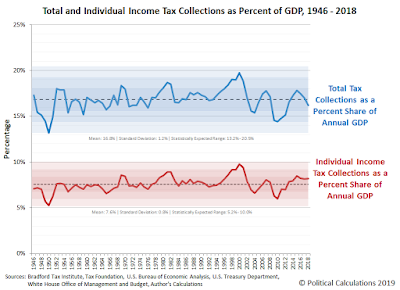 What does all this mean?  It means quite a lot.  The first thing is something I harp on all the time: tax rates are not tax revenues - the money collected.  They're different things.  They may be correlated mathematically but if rates go up, revenues don't automatically go up as much.  People change their lives to save paying tax.  (I know, right?  What a surprise!)  It means that the Dems' wealth tax is not going to make much of a difference in collected revenues.  Simple-minded people like Warren, Sanders, or  Pistachio Kotex will believe that tax revenues will go up enormously with a wealth tax.  Data says that if they raised the top rate even to 90% that revenues wouldn't go up as much as they think - they'd stay in the historical range.