Living Skin with Blood Vessels Can Now be 3D Printed

The idea of printing enough skin for a skin graft without harvesting skin from elsewhere on the body isn't new.  There have been other solutions put forward.  In the words of researcher Pankaj Karande, an associate professor of chemical and biological engineering at Rensselaer Polytechnic Institute:


“Right now, whatever artificial skin is available as a clinical product is more like a fancy Band-Aid.  It provides some accelerated wound healing, but eventually just falls off; it never really combines with other skin cells.”

One of the reason it never really combines with the rest of the person's skin is the lack of blood vessels.  These are vessels that are too small to suture (stitch) individually for the person, and would have be located extraordinarily precisely for that to even be possible.


Karande has been working on this challenge for several years, and has shown that researchers can turn two types of living human cells into “bio-inks” and print them into a skin-like structure. Since then, he and his team have been working with researchers from Yale School of Medicine to add blood vessels.

He and his team recently discovered that if they add key elements, including human endothelial cells (which line the inside of blood vessels) and human pericyte cells (which wrap around the endothelial cells), along with animal collagen and other structural cells typically found in a skin graft, the cells start communicating with each other and form a blood vessel network within a few weeks.

When grafted onto a mouse, the blood vessels started to communicate and connect with the mouse's existing skin.  Vitally important because the addition of blood vessels allows nutrients to reach the skin and help keep it alive, not sloughing off like “a fancy Band-Aid.” 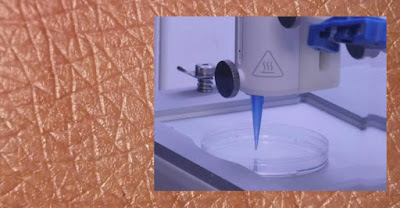 Over the life of this blog and going back to when I first heard of it around '97, I've been a strong fan of/advocate for/believer in tissue engineering like this example.  Prosthetic limbs are wonderful, but what if for every veteran returning without a leg or arm, we could build them a functional replacement?  What if everyone who has an organ removed due to cancer, or is burned or otherwise seriously injured, we could replace what they lost?  On a more humble scale, what if a person who's now getting a hip replacement could get their joint fixed with newly grown cartilage instead of getting cut open, bone removed and replaced with metal and plastic?  Humanity is a long way from that.  We may never get there.  But I'm glad some people are trying.

Around 15 years ago, a technician friend asked me if I'd like to live forever.  After thinking for a while, I surprised him by saying, “not without a lot of better technology first.  Looking at myself now, I'm too covered with scars and have too many joints that need grease fittings to imagine getting to be three times my age.  Maybe if we actually 'live forever' those problems will eventually get fixed, but if they don't, within the first 200 years we'll be unable to move and unrecognizable because of scar tissue.”