Tiny Caribbean Country Dominica Is China's Base in the Americas?

I learn today from an article reprinted by FreePressers that China seems to have pushed into tiny Dominica as their entry into the Americas.


Dominica — population 72,000 — has been the spearhead of much of the People’s Republic of China’s strategic operations in the Caribbean Basin.

From this base, the PRC has engineered its support for Venezuelan President Nicolás Maduro (even though his Administration has lost much international recognition), Cuba, Bolivia, and elsewhere, and has been used as a major base for intelligence and political operations against the US and elsewhere in the Americas.

Why Dominica?  Dominica is small, not even 300 square miles, and out in the eastern Caribbean area commonly called the Windward islands.  Dominica's about 1/5 the size of Rhode Island, the smallest state in the US, and its population is also tiny.  If that cited 72,000 population is accurate, every man woman and child on Dominica could fit in the Los Angeles Coliseum.

Although part of the UK Commonwealth, there is no High Commission in Dominica nor is there a U.S. embassy.  By contrast, the Chinese Embassy, outside the Dominican capital, Roseau, is, disproportionately large, and clearly a base for regional operations, particularly by the Ministry of State Security (MSS), Beijing’s national-level intelligence service.  The MSS is said to be active throughout South and Central America.

It's not surprising that a special election being held there on December 6th hasn't made the news here in the US.  That would entail doing real journalism; something other than staring into Adam Schiff's eyes or breathlessly trying to cover for the DNC.  It also hasn't made the news in the UK, although for a better reason than the Schiff Show; they have their own special election on December 12th.  Since nobody's watching, it's a good time to try to pull off an election scam.


The result of the PRC’s engagement has been, over the 15 years Prime Minister Roosevelt Skerrit (Dominica Labor Party) has been in office, that Dominica has become the hub of a large network of illegal activities which have funded the effective suppression of anything like democracy on the island.

It is for this reason that many foreign political observers and some Dominicans have said that the opposition United Workers Party/Team Dominica (conservative) movement should boycott the Dec. 6 election as a protest to the advance steps Skerrit, 47, and his team have undertaken to ensure that, regardless of voter intention, he would win a fourth consecutive term in office. After all, the opposition had unsuccessfully taken its protests against vote rigging to the courts in past elections which Skerrit has claimed victory. Why should it expect the 2019 elections to be different?

Why participate in the charade? After all, the Skerrit Government absolutely rejected the combined report of Joint CARICOM (Caribbean Community), Commonwealth, OAS (Organization of American States) Task Force mission to Dominica, Aug. 6-9, urging electoral reform and political dialog before any future election.

Indeed, it is probable that Skerrit called the Dec. 6 election specifically to head off any requirement to institute reforms which would guarantee a transparent, free and fair election. 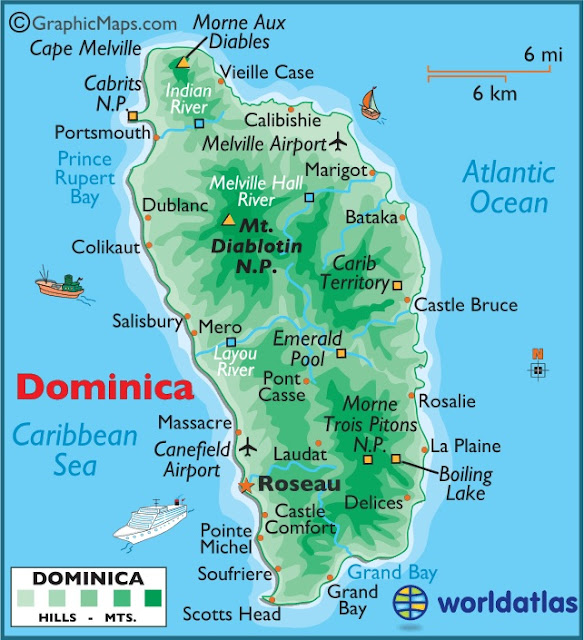 Somehow, I think if the conservative United Workers Party/Team Dominica boycotted the election it would have no effect the Skerrit government; they'll declare victory no matter what.  It sounds like China's expansion into the Americas will be unaffected.

Offered for your consideration...