Auto Giants Line Up Behind Trump and Feds On MPG Standards

This is an interesting development.

According to Electronic Design's Weekly Newsletters, several major automakers have reversed their course on the Trump administration's legal struggle with California over who sets standards for mileage and emissions.


A coalition of international automakers, including General Motors, Toyota, and Fiat Chrysler, have reversed course and are siding with the Trump administration in a legal battle with California over fuel-economy standards for automobiles.

The three companies, plus a trade association called the Association of Global Automakers, plan to intervene in a lawsuit filed by the Environmental Defense Fund against the administration, which is seeking to revoke California’s congressionally granted authority to set standards that are stricter than those issued by federal regulators.

In case this case got around you when it first made news, the US Fed.gov has staked out the position that they regulate the automakers; they set mileage standards, emissions standards, safety standards, the whole nine yards.  At some time in the past, California said that they were going to institute stricter standards, and they were given that authority by a prior congress.  Just like every product you buy comes with a warning that it may cause cancer in California, once they pass some law like that it quickly becomes the default national standard.

In the case of “everything causes cancer in California” it becomes the butt of nationwide jokes, but in the case of tougher standards for emissions or fuel efficiency manufacturers are faced with making a California version or a Rest of the US version of every car.  Not wanting to lose the business of the biggest state for car sales, the manufacturers make every car California compliant and raise the price of everybody else's car in America.  From their standpoint, making every car that way is cheaper than making two versions of every model and keeping them straight.  You know how California compliant magazines and handguns are ruining it for the rest of us - it's the same here.

Initially, the automakers didn't want to rock the boat, and sided with California against the feds, but somewhere along the line this changed.  In addition to GM, Fiat Chrysler, Toyota, the suit has been joined by a group, called the “Coalition for Sustainable Automotive Regulation,” which includes Nissan, Hyundai, Kia, Isuzu, Maserati, McLaren, Aston-Martin and Ferrari.  Notice who's missing?  What about Ford?  Honda?  Others?  That's because they already signed a deal with California that's better for them but potentially not as good as it could have been if every carmaker had joined in.


The automakers decision pits them against leading competitors like Honda, Ford, Volkswagen, and BMW, which have sided with California in the battle. In July, these automakers completed a deal with California regulators to meet standards that are slightly less restrictive than the Obama standards, and that they could apply to vehicles sold nationwide. [Bold added: SiG]

On the other hand, it doesn't hurt these four at all to say, “we're better than we have to be - we meet the tougher standards.”  While this has an aspect of states rights to it, this is one of those things that could get sticky.  If California was a smaller market and it was very hard for automakers to meet their standards, they might simply refuse to sell cars there; but California is the biggest state in the country, and famous for its freeways and spreading suburbs.  More cars are sold there than any other state by far.

In the previous quoted paragraph, it appears that California regulators negotiated down on the Obama standards.  That implies they're not going for tougher standards because they're afraid they're going to suffer if the mileage isn't as good as they originally wanted.  So why are they fighting?  Afraid of losing their power?  Is their opposition entirely because they're opposed to anything Trump might want?  Trump Opposition Syndrome - instead of Derangement?


The Obama-era national fuel economy standard would require automakers to build vehicles that achieve an average fuel economy of 54.5 miles per gallon by 2025. The Trump administration has proposed freezing federal standards at 2021 levels until 2025, with final rules expected by 2020.

This prompted California to declare that it will go its own way and keep enforcing the earlier, stricter standards. The State then took the Trump administration to court, saying that it has the right to write its own clean-air rules under the Clean Air Act passed in 1963. Several other states have pledged to follow California’s lead in enforcing stricter standards for auto emissions.

The legal fight between the Trump administration and California over auto pollution rules has swelled into a battle over states’ rights, which is likely to only be resolved once it reaches the Supreme Court. 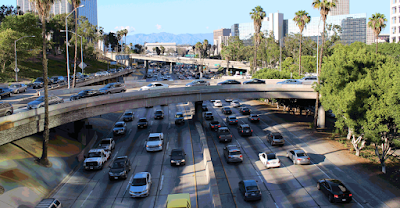 The Harbor Freeway in El Lay - the linked article refers to this as a typical freeway, but I think it's a bit more extreme than typical.  Photo source