A Movie for Techie History Buffs

Monday, Mrs. Graybeard and I used our retiree privilege for a movie we've been meaning to see, The Current War.  I understand that this is a limited run and they're planning for release to some other distribution method (although I don't know which format) so I'm pointing it out for an audience who might want to catch it before it goes away.  This might be your only week to see it.  I first saw a trailer for this in 2016 or '17 and then it went away.  I've heard a rumor it was somehow held up by the Harvey Weinstein hoopla, although I can't imagine why.  IMDB isn't much help, only saying,


The film originally premiered at numerous festival and was then shelved for 2 years until a re-edited version (titled "The Current War: The Director's Cut") was released theatrically in 2019

and the only difference they refer to is the sound track between the two versions.

The word Current in the title isn't the usual meaning of “present.”  The movie is about the turbulent period in the late 1800s, 1880 to about 1900, when the world first saw Edison's light bulb and was making the decisions on whether the world would be powered by Edison's advocated Direct Current (DC) or George Westinghouse's proposed Alternating Current.  The major technical advantages and disadvantages of AC vs. DC were well known at the time, but the practicality of doing either system on a national scale was simply unknown.

It was a wild time in history.  Edison believed that the major advantage of DC was that voltages could be kept low, and that led to DC being safer.  The other side is that lower voltage led to limiting areas that could be served with DC.  It would require that the country have generating plants much closer than we see now.  Westinghouse and his group understood that by stepping up the voltage with a transformer, the current went down and resistive losses in the power lines went down with it.  Simply AC “went farther” and fewer power stations were needed, but if a person got themselves across the higher voltages they were more likely to be killed.  Edison wanted to bury power lines; Westinghouse wanted to put them up on poles so people couldn't get to them.

This led to the rather well-known dark side of the period.  Edison's lab killed lots of animals to get the point across.  No one had been killed by AC power yet, Edison was showing it was possible.  An advocate for humane capital punishment comes to Edison to invent the electric chair and Edison agrees to provide technical details if he's kept anonymous.  Westinghouse hires someone who finds Edison's name on the documents for the design of the chair.

One of the subtopics was that nobody knew how to make an AC motor, just DC and that gave Edison an advantage.  In one scene, Tesla is giving a talk at a university and shows off a drawing of an AC motor while explaining how to do it.  It was like they copied it from a modern textbook.

It's got two big name actors, Benedict Cumberbatch and Tom Holland playing Edison and his secretary, Samuel Insull.  Westinghouse is played by an actor I could swear I'd seen before but had to look him up on IMDB to be sure.  Chances are I saw him in the current version of the Superman franchise, where he played General Zod from Superman's home world, Krypton. Rounding out the top four, Nicholas Hoult, who has starred in the most recent X-Men movies, plays Nikola Tesla

The fun fact of the movie is that both Benedict Cumberbatch and Tom Holland are from the Marvel Cinematic Universe, but Cumberbatch (Doctor Strange) and Holland (Spiderman) first worked together in this movie.  Although Avengers Infinity War and End Game both came out during the time Current War was languishing on the shelf, they met during the filming of this one.

I think the movie would appeal to anyone who has more than just a passing interest in that story and the times at the end of the 1800s.  Definitely a movie for techies.  We both thought it was very well done.  Interest in this period has been revived on occasion.  Glenn Beck devoted hours of programming to it in the early days of his TV network.  Much of what I've seen focuses on Edison as the “hard-driving son of a bitch,” but I think this movie was more even handed.  Yes it shows the rivalry, it shows both of them as driven men who are obsessed with changing the world and know it.  Yes, it shows how Nikola Tesla was the “unappreciated genius” he's usually portrayed as, even as it shows him working for both Edison and then Westinghouse. 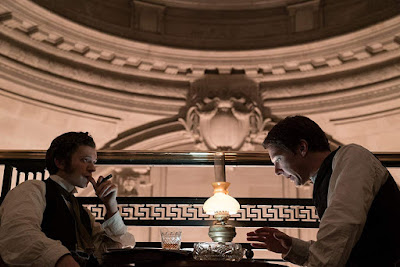 Tom Holland and Benedict Cumberbatch from one of the scenes just before the Chicago World's Fair in 1893.