Something I'm Thankful For This Thanksgiving Eve

A not-so little thing I'm thankful for is that the rocket ranch, just up the road, doesn't deliberately drop boosters on us, like the Chinese do.


On Friday, a Long March 3B rocket launched a pair of Beidou satellites into orbit. The rocket's ascent was normal, but its first stage booster tumbled into a village down range from the Xichang Satellite Launch Center, in the South-Central part of the country.

This was the aftermath reported on Chinese social media over the weekend: 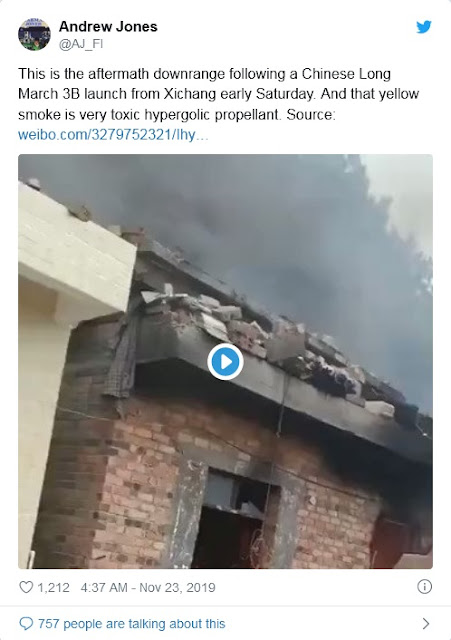 It has happened many times before, including most infamously in 1996 when a Long March 3B rocket veered off course shortly after a launch and crashed into a village. Chinese officials reported six dead from the accident, although Western sources have speculated that hundreds of Chinese citizens may have died in the accident.

See, unlike the US, the European Space Agency, Japan, New Zealand, and a host of other nations, China doesn't launch over water, where the chances of hurting someone are greatly reduced.   China launches from far inland, much like the Russian/former USSR Baikonur Cosmodrome in Kazhakstan.

Mind you that in the late 1950s through early 1960s, there were many rockets that went down in the Atlantic and some for which control was lost that got very close to the beaches here (I think at least one came onto the land).  During the development of what's now called the first cruise missile, the SM-62 Snark, there were jokes about the area being home to “snark-infested waters.”  In July of 1962, an Atlas Agena carrying Mariner 1 to Venus was destroyed off the beach here because of a typo in the control code, and became a local legend.  On the other hand, there hasn't been much of that since the early days, which is different from China's routine of dropping expended stages knowing they're going to fall on land.  It's land with low population density, but not zero population.


Earlier this year, China began experimenting with grid fins to help steer the first stage of its rockets away from populated areas. However, it seems likely that China has invested in the grid fin experiments more to emulate SpaceX's ability to land and reuse first stage boosters than protect its population.

This is because the Xichang launch center has been open for more than three decades, and grid fin technology is older than this. The country has had ample time to protect its citizens, but only now—after SpaceX as demonstrated the viability of vertical take off and vertical landing—has the country seriously looked into such technology.


"The safety standards used in Chinese space launch would leave American regulators apoplectic," Autry wrote in Space News. "As is the case in many global industries, this lax approach to environmental standards and human safety promises to provide China with a significant cost advantage over more responsible and highly regulated American firms."

I get that the US built the launch facilities on Cape Canaveral for rather prosaic reasons: the area was very lightly populated in the late '50s, oceanfront land was cheap, and the latitude gives a free speed increase to vehicles launched toward the east.  Not dropping boosters on American heads entered into the decision matrix, but that just means seaside launches, which also applies to the Outer Banks of North Carolina, Wallops Island, Virginia and lots of places.  China built their launch facilities inland rather than on the coast because of paranoia over being targeted by the US or the USSR, but the days when that mattered have been long gone since the advent of photographic satellites with resolutions less than 1 foot.  Their launch facilities could be taken out in preemptive strike no matter where they're located, as can ours and everybody else's.

As others have commented, I'll be taking off tomorrow for our annual family gathering in South Florida with my brother and his extended family.  Friday we'll be back, but I'll be smoking a turkey and might not be very active here either.

In the meantime, a happy and healthy Thanksgiving to you and yours!

Posted by SiGraybeard at 4:59 PM