Thanksgiving was a good day.  It's a combined five hours of driving and the families present are getting smaller, but we spent from noon till about 8PM with my brother's (and therefore our) extended family. It's just good to spend time with family.

Today was our Thanksgiving here with just us.  I smoked a turkey; the twist this time is that I tried something I had never done, found here on Serious Eats.  A combination of spatchcocking the turkey together with a dry brine and then smoking.  Instead of my old smoker, the Masterbuilt electric (MES), this was done in my Weber kettle grill.  It gives such a nice pink smoke ring in the meat that you just don't get with the MES.  Look at the pieces around the right and back of the plate here. 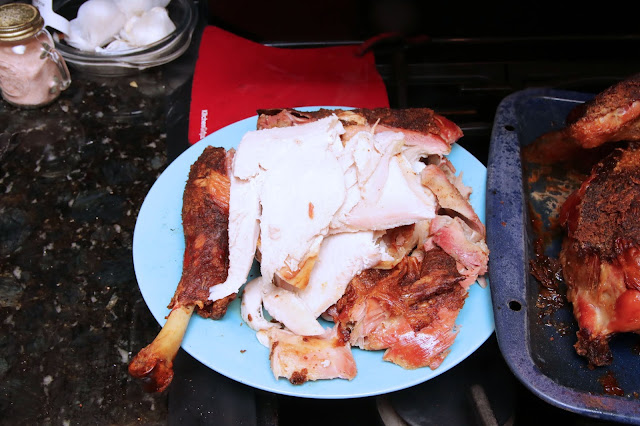 Came out quite good.  I goofed the recipe a little and left too much salt on the skin, so I'll do that more carefully next time, but I think the results were worth trying again.

Now comes the adventure for the weekend.  It starts where so many of our troubles have lately, the lightning strike back on August 1st.  One of the first problems we encountered was that Mrs. Graybeard's computer lost its video output.  We originally thought it was the monitor, but later realized it was the video system in her 8 year old HP desktop.  By switching from the DVI output to its other (VGA) output, we found that the monitor was fine.  For a while, but the VGA output eventually started going bad.  Eventually the video system died completely, and we replaced it with a spare video card - which was from the computer in the ham shack that blew out.

To shorten the story, that system started failing.  Slowly at first, like once a day, the display goes black then comes back in a few seconds.  It would display a notice that the video driver failed but the system recovered.  About a week ago, maybe two, the system started failing in worse ways.  Instead of coming back looking normal, we'd get random sparkling pixels.  Then it got worse, yet.  Eventually the system started resetting and not working at all.  Then working in Safe Mode but not in normal, Windows modes.  Then working or not working unpredictably.

Both that desktop and mine are Windows 7 machines, and if you're not running 7 you might not know that Win 7 is going end of life, with all support ending in January, just like XP before it.  With her computer seemingly at the end of life, and this one needing at least a new OS, we decided that with two eight year old machines, we'd replace them with newer machines that come with Windoze 10.  Long stories about shopping deleted, we picked out some systems over the weekend that are a later model of this one, a Dell Inspiron.  This is a mid-range home/small biz computer and we're hoping the new ones will be quite a bit faster, with more processor cores and all.  The new boxes arrived today, and since her computer has been knocking on death's door for at least a month, she's started the migration.

I will migrate to the new computer tomorrow.  Wish me luck.  After 8 years of faithful, daily service, this will become a "doorstop computer" - which is what the replacement computer in the ham shack was until the lightning stroke.