The Rising Attacks on DIY Guns

According to an article yesterday in the Ammoland Shooting Sports News, in the wake of the Santa Clarita, California high school shooting, the anti-gun forces seem to be cranking up attacks on so-called “ghost guns.”


The Hill is among news agencies reporting that California investigators determined that the pistol used by the 16-year-old shooter was “an unregistered ‘ghost gun’” that had no serial number, according to Los Angeles County Sheriff Alex Villanueva.

“Ghost guns, also known as ‘kit guns,’ can be purchased online or at gun shows,” The Hill noted. “They do not have serial numbers, nor are they registered.”

Oooo!  A twofer!  They get ghost guns and gun show loophole by proxy.  Not surprisingly, all the reporting excerpted in the article show the same quality of information.


The Los Angeles Times is also repeating the terms in its reporting.

“The gun used in last week’s shooting at Saugus High School was assembled from parts, a so-called ghost gun without a registration number...
...
“The teenager who shot five classmates, killing two, at a Southern California high school used an unregistered ‘ghost gun,’” the Associated Press also reported.
...
the Seattle P-I.com is reporting that anti-gun Washington Attorney General Bob Ferguson, who has sued the Trump administration 51 times over the past 3 ½ years, just obtained a summary judgement in federal court against a Texas company that had published data on the internet about how to construct a 3-D printed gun. The story said this: “A Texas anarchist and gun rights advocate, Cody Wilson, has made it a crusade to publish blueprints.”

They don't bother to mention that Cody hasn't been associated with Defense Distributed for more than 14 months, but that's just a start.  Those aren't registration numbers on a gun, they're serial numbers, and there's no absolute requirement that all guns have one.  There are millions of guns in the US that were made before the serial numbers became required.  As you know, facts don't matter to these wannabe tyrants.

It looks to writer Dave Workman at Ammoland that this is the start of an organized campaign to prohibit DIY guns, and the 80% lowers that are the common starting point (these guys seem to have made a wide selection of different platforms available, but I know nothing about them).  It seems to me that 3D printed guns scare them the most, and the anti-gun folks' main problem is that horse is already out of the barn.  In fact, that horse is so far out of the barn that it got out of the corral, and left the county.

I don't remember where I posted this, but someone had a picture of an AR lower with a guy's face and his hand giving the reader the middle finger; it read "here's my serial number."  I countered that I've always said that I think it's better to make up a company name and a serial number for all guns you complete.  Don't call it a Colt or something they can check on, make up a company.  Nobody knows how many small shops make their own ARs from off the shelf parts, and nobody has a comprehensive list that's accurate for more than 15 or 20 seconds.  I figure making up a serial number takes less time than explaining to Officer Nahtso Friendly in a random traffic stop why you don't have or need a serial number. 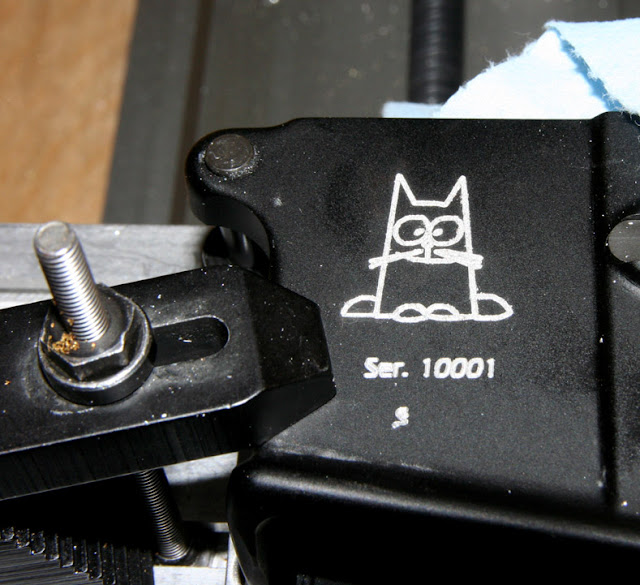 The serial number can be read as 10 001, meaning the first unit of the 2010, or maybe as week 10, unit 1, but I really intended it to be a negative number (-15) in two's complement as a geeky joke.  The company logo is also a joke.  My upper was from DPMS, and they use a fierce-looking panther for their logo.  So I turned the fierce looking panther into a goofy looking cartoon “puddy tat.”  I've told people at the range it was made by Moe Guns, whose company motto is “Who doesn't like owning Moe Guns?”  Nobody has challenged me.

Bottom line is that I don't think this could happen without a major political swing in the country, but I gotta believe that if one of those current Democrats running for the nomination got it and won the presidency, “hell, yeah, we're coming for your AR-15s” and this could happen.  If you've kinda liked the idea of finishing an AR from an 80% lower, but not today, it might not be too paranoid to buy an 80% lower or two.  Just to have on hand, just in case.  Right now, the prices are often lower than you'd pay for a finished lower when you count the FFL transfer cost on the finished one.  Pricing figures to go up if the market is shut down.