On Wednesday at SpaceX' Boca Chica Beach facility, where the first Starship stainless steel ship was the backdrop for a dramatic conference, that very rocket failed during a tank pressurization test according to coverage in Ars Technica.


About halfway during the process, however, some sort of failure occurred as the top bulkhead of the vehicle broke apart and went flying away. This was followed by a large, white cloud of smoke and vapor emanating from the interior of the vehicle, which eventually cleared to reveal a dented, but still shiny Starship. This was the same vehicle the company revealed in late September.

SpaceX sought to play down the accident, noting this was a "max" pressurization test to stress the system. No one was hurt, the company said, and it was not a serious setback in the development of the ambitious vehicle. The company's founder and lead technical designer, Elon Musk, later said on Twitter that this prototype had "some value as a manufacturing pathfinder," but that the flight design of the vehicle would be "quite different."

So what's the deal? Is this a catastrophe for SpaceX that dooms its Starship program? Or just a minor setback as the company suggests? The answer is probably closer to the latter.

Never lose sight of the fact that Musk and the higher level managers in his companies come from the Silicon Valley mindset.  A common idea in the high tech world, is to “fail early”; that is, don't hold development back until you're 100% positive the design is optimal.  Do your computer simulations and math analysis, but (1) prototype as soon as possible, (2) fail early and (3) correct quickly.  That's what SpaceX is doing.  Even more aggressively: they're iterating the design in Texas and here on the Space Coast, bouncing back and forth, incorporating everything they can learn at breakneck speed.


The key to grasping why SpaceX can afford an accident like this is to understand its iterative design philosophy. Under this approach to the design of spaceflight hardware, the company builds vehicles, tests them, and flies them as quickly as possible. And if they fail, as often happens, SpaceX fixes them. This is especially true of the Starship program in which teams of SpaceX engineers in Texas and Florida are separately building prototypes of Starship to learn from them and then improve the design in subsequent versions.

The nomenclature SpaceX uses is "Mark," as in the vehicle the that was severely damaged Wednesday was Mark 1, with Mark 2 being built in Florida, and work already beginning on Mark 3 in Texas. It is possible this "Mark 3" vehicle will fly into orbit sometime in 2020.

Go read that Twitter stream from Musk; you don't need a twitter account (I don't have one) and you can watch some videos of the accident.   You'll also see speculation from people who follow SpaceX closely that the real action is likely to be Mark 3 or Mark 4, and one or both could be built here in Florida.

This is completely the opposite of how the major contractors and NASA itself have together developed spacecraft.


For casual observers of spaceflight, this "iterative" design philosophy is very different from the much slower, linear design process used by traditional aerospace partners for large development projects. Under this more traditional process, a company—or, historically, NASA—seeks to avoid the risk of a rocket failing before it is perfected. Years are spent designing and testing every component of a vehicle before it is assembled for a full-scale test. As a result the process is much slower and more costly.

The reason SpaceX can do this is that this is self-funded and that means they're not answering to congressional hearings like NASA does. NASA chief Jim Bridenstine said he's glad some contractors are working this way; saying “I like it being a part of the mix of our contract capabilities.”


It is easier for a company like SpaceX working on a self-funded project like Starship to do this than a government agency, noted Phil Metzger, a planetary scientist at the University of Central Florida. "You have to let people see you fail, and you have to push back when the critics use your early failures as an excuse to shut you down," he recently said. "This is why it is hard for national space agencies to adopt it. The geopolitics and domestic politics are brutal."

During design, we frequently run into situations where two slightly different analyses of a design get drastically different results, or one camp gets set up thinking an approach will work and another camp says it won't.  It gives rise to the cliche' that “one lab experiment decides six months of arguing theories.”  The essence of the iterative design approach is to get to that lab experiment as fast as possible and not spend six months arguing. 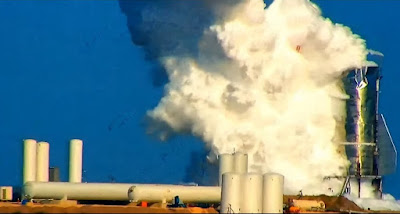 Pad explosion, seconds after the top of the pressure vessel decided it wanted to get a closer look at some other place.  SpaceX photo.