Got A Couple of Hours?

On Wednesday night, Glenn Beck did a two hour presentation in the open on YouTube and available a couple of other ways.  The subject is the story of the Deep State and the impeachment hearings.  The video is still freely available here.   Two hours.  One short potty break at the top of the second hour with no other interruptions.  That's right; no commercials.

The program is called The Democrats' Hydra, a reference to the shadowy evil organization in the Captain America movies from the Marvel cinematic universe.  In mythology, the hydra was a multi-headed monster and it was said that if you cut off one head, two will grow back to take its place.  That became part of the MCU story of the criminal/terrorist group Hydra.  I've used the analogy for the Fed.Gov for most of the life of this blog.  Beck shows its origins.

Such a report couldn't be done without thorough research, so they used FOIA requested documents, Wikileaks releases, documents from trials in the Ukraine and many other places.  There's a summary posted online as well.  He points out that he knows that he's going to be accused of spreading conspiracy theories, but that's not what this is.  Conspiracy theories don't have documentary evidence backing them up  - some of them emails from the person committing the crime.  This is evidence that would probably stand up in a court of law (of course, IANAL).  As he puts it, it's the difference between conspiracy theory and conspiracy facts.

The documentary gets to the modern era in the second hour.  We find current state department employees actively working to start revolutions all around the globe.  We find current state department employees actively training citizens in other countries how to take down their governments.  We find little details like that the state department used taxpayer money to print Saul Alinsky's “Rules for Radicals” in Macedonian (the language) to enable revolution in that country.  We find details of an initiative started as soon as Obama took office and renamed a year later (by the Hildebeest) as “Civil Society 2.0.”  Be aware of that phrase.  Like all propaganda, the things actually done by people acting under Civil Society 2.0 have virtually nothing to do with being civil.

It's quite the story.  In a way, it validates all the worst things you've ever thought were going on in our country.  Definitely worth the two hours to watch. 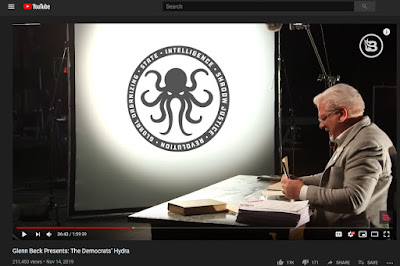