The Deutsche Bank Death Watch has been going on for at least a year, and tracked by author Michael Snyder on the Economic Collapse Blog.  Deutsche Bank is in deep trouble and almost certainly going to go bust, but my view is it won't be before the end of the year, and probably much longer.  (Hat Tip to ZeroHedge via Kenny at Knuckledraggin')

Why?  The usual; they're hemorrhaging cash and going broke.  How bad is it?


We know that Deutsche Bank has been losing money at a pace that is absolutely staggering...

If you add the losses for the second and third quarter of 2019 together, you get a grand total of nearly 4 billion euros.

How in the world is it possible to lose that much money in just 6 months?

If they had hired people to throw $100 bills out the window every second of every day, 24/7 for 6 months, they would have only thrown $1.57 Billion out the window.  They've laid off thousands of workers; at one time (July of '19) 20% of their employees on one day.  (I've been through a lot of layoffs in my career, even laid off a couple of times, and 20% is a big cut!)  They've even canceled this year's daytime, coffee-and-cake Christmas reception for retired employees.

Again, why?  The usual, bad management.


There have been so many bad decisions, so many aggressive bets have gone bad, and there has been one scandal after another…


In April 2015, the bank paid a combined $2.5bn in fines to US and UK regulators for its role in the LIBOR-fixing scandal. Just six months later, it was forced to pay an additional $258m to regulators in New York after it was caught trading with Myanmar, Libya, Sudan, Iran and Syria, all of which were subject to US sanctions at the time. These two fines, combined with challenging market conditions, led the bank to post a €6.7bn ($7.39bn) net loss for 2015. Two years later, it paid a further $425m to the New York regulator to settle claims that it had laundered $10bn in Russian funds.

Those two are relatively easy questions; the hard ones are do they really go broke and (my favorite question) then what happens?  Author Snyder thinks the first one is easy.  Hell yeah, they're going down.  Snyder says Deutsche Bank “ ...is just a zombie bank that is stumbling along until someone finally puts it out of its misery.”  The second question, of course, is harder and long time readers know one of my favorite quotes of all time, “prediction is very difficult, especially about the future” (physicist Niels Bohr).


Deutsche Bank is the largest domino in Europe’s very shaky financial system.  When it fully collapses, it will set off a chain reaction that nobody is going to be able to stop.  David Wilkerson once warned that the financial collapse of Europe would begin in Germany, and Jim Rogers has warned that the implosion of Deutsche Bank would cause the entire EU to “disintegrate”…


Then the EU would disintegrate, because Germany would no longer be able to support it, would not want to support it. A lot of other people would start bailing out; many banks in Europe have problems. And if Deutsche Bank has to fail – that is the end of it. In 1931, when one of the largest banks in Europe failed, it led to the Great Depression and eventually the WWII. Be worried!

How can I say they probably won't collapse for a while?  Overlay their share price on Lehman's from 2008. 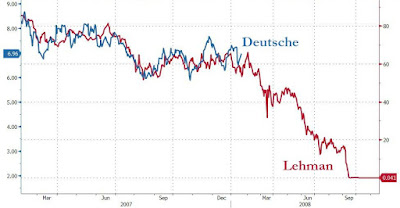 (Deutsche Bank share price, from Bloomberg posted on ZeroHedge  In plots like this, I always assume the prices are scaled or offset or otherwise manipulated to make the similarities stand out better.)

Speaking of quotes, I'm also a fan of the one that “history doesn't repeat, but it rhymes.”  I think these plots rhyme.  By the time scale shown, Deutsche is at about January of '08, while Lehman made it to September, eight months later.  We'll see how these plots overlay as we go along.  I suppose some unexpected event could speed up the approach of their end, and conceivably even save them.  Probably not a safe bet.