I don't know how interested folks are going to be in my cleaning up after the lightning strike, but it's how I spent the day and how I'll spend some more.  Yes, I heard about the El Paso shooting, but remember my First Law:  First Reports are Always, Always Wrong.  It's not worth paying too much attention to.

There were good steps and bad steps today.  On the good side, I tested all three CNC machines and they're all fine.  Since the key seemed to be long wires, I was concerned about the wires between the controller boxes and the motors conducting picked up voltages into the stepper motor controllers.  I didn't use a caliper to measure the accuracy of the moves, but I did move all four axes on both mills and both axes on the lathe.   There are distinctive sounds motors make when some forms of problems are present and I didn't have any of those.  They're probably fine.

Yesterday, we thought Mrs. Graybeard's computer monitor had blown out.  She realized the comparison with the replacement monitor was using a plain VGA input while the blown one was DVI so she found a way to test the DVI output on her computer and that was what had blown.  When she went from the VGA output of her video card to the VGA input of her old 23" monitor, the monitor was fine, so she put the big monitor back and put the 17" monitor aside.

Last night, my monitor, which had been perfect, started developing an oddball problem.  Latent failure showing up?  The problem was while typing, suddenly a large black square with a white padlock icon in it showed up in the middle of my screen, flashing on and off.  The monitor (Dell) has a group of controls on the lower right side of the screen that bring up a menu of adjustments; color temperature of the display, which input its using, stuff like that.  That display started flashing on the screen.  It's a problem that shows up in web searches but the usual suggestions didn't work for me.  This morning, it got worse, going to solid color screens in green, blue, red and gray.  As time was going by, it kept getting worse, so I took it off the system and replaced it with the spare 17" monitor.

It was time to look more into the ham shack computer/monitor and see what was up with that.  Recall that the computer wouldn't start and the monitor looked like it was dead.  Some quick voltage measurements and inspections in the box confirmed the computer's power supply looked dead.  We have some spare computers that we never tossed out and I put one of those in place on the radio bench.  It immediately came on and the monitor sprung to life.  Changing over to a new computer is going to entail reinstalling all of my ham radio software and it was bitchy to get everything working and to play nice together.  Most ham gear and software requires a serial port - just as ham manufacturers started putting serial ports into all their gear, the computer companies stopped using RS-232 serial ports and switched to USB.  My radio has a USB port, but the accessories use serial ports.

The old computer had a dual serial port card in it, so I moved that card and the hard drive from the old system into its replacement.  The good computer now wouldn't start.  Since I only put two things into it, taking them out one at a time showed the serial port card kept the PC from starting.  Whut?  Then I took a better look at the card.  Uh oh.  Parts were blown off it.  So I looked at the other end of the serial cable link.  This serial port connected to my antenna rotator controller.  It had parts blown off it, too. 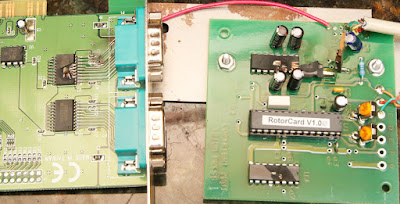 Computer card on the left - the top IC has major damage, and the components to its right are blown, along with traces on the PWB being blown.  A chip capacitor appears to be blown physically off the board.  There are three components visibly destroyed in the rotator interface on the right.  Top right, there's a voltage regulator that's blown into two physically separate chunks (no, I didn't move one for emphasis).  The top most IC, between the four black cylinders (electrolytic capacitors) has half its package blown off and the chip closest to the bottom edge of the card has its lid blown off, too.  It looks like the overvoltage might have come out of the rotator serial port, traveled into the PC, blew out the parts, shorted high voltage onto the power supplies, which blew up the power supply.  After our experience with the monitors, I tried starting up that computer without the serial port card in it - still no go.  The power supply is really dead.

The really good news here is that it looks like we've gotten over the hump and have identified everything that needs repair or replacement.  Some of it can be worked around and lived with, like the DVI output of a video card not working.  Some of it might require a replacement, like my 23" monitor or our water heater controller unit.  Some of it is "just sit down and work on it" stuff, like moving apps to my replacement computer in the shack.  It looks like the work for the next few days will be in the ham shack.  Between getting that computer running, figuring out some odd results I get on the antennas (which I need software on that old computer to test with) and trying to see why my amplifier won't turn on, it will take a while.