As I mentioned in the start of my posts on Apollo 11, during virtually all of the mission I was with my parents on a trip to New York City on what would end up being our last major vacation together and their last trip to the city they grew up in.  Along some of the streets in the City, we saw signs for something called the Woodstock Music and Art Fair coming in mid-August.  I was 15, so of course I was interested, but I also wasn't old enough to drive alone let alone travel by myself between Miami and upstate New York.  Needless to say, I went home with my parents when their week with family was up and didn't know anything until a few weeks after the concert when stories started getting around. 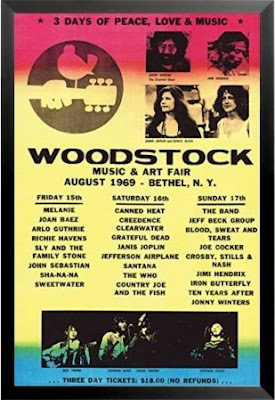 It started 50 years ago yesterday.  As most of you know, I'm a student of guitar.  It has mostly been acoustic guitar lately, and I get a newsletter from a magazine I subscribed to for a while by that name: Acoustic Guitar.  In celebration of the anniversary, they put together an article on attempts to run down the acoustic guitar acts from Woodstock.


So many of the most indelible images from the quaintly named Woodstock Music and Art Fair, held 50 years ago this August, come from the epic concert film that came out in 1970 and featured electric guitars being wielded at full throttle: Alvin Lee of Ten Years After boogieing with his red Gibson ES-335, Pete Townshend alternately mauling and windmilling his Gibson SG Special, Carlos Santana squeezing out sparks from his SG Special, and of course Jimi Hendrix coaxing interplanetary magic from his gleaming white Fender Strat.

But there were also many important acoustic guitar moments in the film, and no doubt some of those are burned into your mind, as well: Richie Havens playing so hard it looks like his guitar might blow apart, Country Joe McDonald strumming a singalong, John Sebastian’s delightfully stoned-out solo reverie, and Crosby, Stills, Nash & Young, in just their second performance, introducing their unique sound to 400,000 people sitting in the mud.

Author Blair Jackson then goes into the story about the surprising difficulty of finding out about those guitars in those specific performances, turning up an interesting history.  It's a story of real investigative work.


What I found, though, is that there are relatively few shots in the film or bonus footage that show acoustic guitars clearly—the performances are overwhelmingly dominated by close-ups on faces—and just about all of the night footage is fairly indistinct, even in the close-ups. I consulted colleagues to join me in trying to see if the headstock of this or that guitar in the film or photos suggested a specific brand; occasionally it did, mostly it didn’t. I went down dozens of rabbit holes trying to suss out the guitars played by the principals in the Incredible String Band, for example, until I found some folks in Europe via Facebook who could help me in my quest. I lucked out when I learned that the guitar Tim Hardin played was also used by John Sebastian. And, not surprisingly, Martin had an index of the artists who had played their guitars at Woodstock.

From there, Jackson goes day by day act by act, starting with Richie Havens:


Richie Havens was already a pretty big deal in 1969, though the Woodstock album and film are what truly launched his long career into the stratosphere. ... Havens was not scheduled to open the festival but did so after the producers begged him to—so many performers were having trouble getting to the concert site (including Havens’ bass player, who arrived right as he started his set), he reluctantly but graciously agreed to go on first. “I just saw color to the top of the hill and beyond,” he recalled in Joel Makower’s excellent 1989 book, Woodstock: The Oral History.

Richie Havens played a Guild D-40, a large body (Dreadnought) model still available today (example), opening the show with Freedom. Richie Havens was the first guitarist I ever saw who wrapped his thumb around the neck and would fret bass notes with it.  He passed away in 2013.

Jackson proceeds as the acts did, some names you'll know others you likely won't, unless you were very into folk or acoustic music then.  I listened to most.  Liked some a bit and some a bit less.  Some highlights were Melanie, with a different-sounding take on Bob Dylan's Mr. Tambourine Man.  Melanie was playing a Goya guitar and ended up as a celebrity endorser for the brand.  Goya guitars are still out there, but the company was bought by Martin in the '70s and doesn't appear to be selling new guitars under that name.


Melanie (Safka), another product of New York’s 1960s folk scene, was a virtual unknown with one album to her name when she was booked as a solo performer at Woodstock at the age of 22. ...  Melanie said she was “terrified out of my mind” to be playing at the massive event, and was actually happy when it started raining hard during the set that preceded hers: “Ravi Shankar went on and it started to rain and I thought, that’s it, I’ll be saved because people are gonna go home now, because it’s raining. Of course, they’re going to go home! I mean, they’re not gonna sit there in the rain.”

As if! She went on, armed just with her Goya nylon-string guitar, and she was ecstatically received for her seven-song set. One of the songs she played, “Beautiful People,” brought her considerable notice at the end of 1969, and then a song inspired by her Woodstock experience, “Lay Down (Candles in the Rain)” became a worldwide smash hit in 1970.

I enjoyed Country Joe McDonald from Country Joe and the Fish  and John Sebastian, probably best known from the Lovin’ Spoonful.  The Band was there, playing probably their best known song, The Weight.  Robbie Robertson played his Martin D-28 which is beyond "still currently available" to more like "still considered one of the standards".  Country Joe, Barry "the Fish" Melton, and John Sebastian are still with us, presumably happily retired.  Finally, the concluding acoustic performance was from a new band that was already becoming a big attraction, Crosby Stills and Nash - before Neil Young joined the group!


The final and probably most significant acoustic performance of the Woodstock festival, this was just the supergroup’s second-ever gig. No wonder Stephen Stills told the crowd, “We’re scared shitless!” Crosby Stills & Nash’s eponymous debut album had just come out and was a national sensation—it would be one of the most influential albums of the late ’60s, with its exquisite harmonies, shimmering guitars, and accessible confessional songwriting. Neil Young, Stills’ bandmate from the earlier Buffalo Springfield, had recently launched his solo career, and became a sort of adjunct member of the group as the trio (augmented by bassist Greg Reeves and drummer Dallas Taylor) began working on their Déjà Vu album that summer.

But when is all is said and done, my favorite performance and favorite video from all of Woodstock is still this masterpiece of comedy based on Joe Cocker.  It's not acoustic.  You have to watch the whole thing.  I first posted this in 2015, and I still find it funny.