All the Things are Free!

The mantra of the democratic debates.  In the last debate, former Maryland congressman John Delaney, apparently trying to appeal to the legendary (if mythical) moderate Democrats, criticized the pitching of free Medicare for All and Free College as being “fairytale economics.” When asked for her reaction, Elizabeth Warren said,


“I don’t understand why anybody goes to all the trouble of running for president of the United States just to talk about what we really can’t do and shouldn’t fight for. I don’t get it.”

That reaction itself is not what this is about.  What it's about is the fundamental disconnect between the world of politics and the real world, as studied by economists, embedded in that response.

Thomas Sowell, one of the great economists of our times, once wrote:

The second lesson of politics is that voters apparently rarely hold politicians responsible for not delivering on their promises.  As a result, scarcity may limit what politicians can deliver, but it doesn’t limit what they can offer.  In the case of the debates, if they're serious about getting to be president there doesn't appear to be much risk in offering lots of things they can't deliver.  Remember, blame is never scarce; the politician can always blame their failure to provide scarce resources on other people.

Let me start by saying it's a fundamental tenet of personal liberty (well, it's one of mine) that it's immoral to force someone else to provide anything which depends on the time and talents of that person.  Nothing that someone else does is a right.  People may want to provide something due to their own altruistic leanings, but other people have no right to expect or demand that.  The provider has the right to ask compensation for their time and effort.

Generally something can only be “free” when it is not scarce.  There must be so much of it that Group A can use as much as they want without diminishing Group B’s ability to do the same. Economists call that “superabundance.”  For example, as long as we're not sealed into a confined space, air is “free.” My intake of oxygen doesn’t meaningfully deprive anyone else of their intake of oxygen.  Thinking about that in a supply vs. demand sense, superabundance means there's so much of a thing that the price is zero.

By that definition, health care and education can never be “free”.  First and foremost, providing either medical care or an educational lecture depends on the sum total of knowledge and experience of the provider - and it's hard to get a better definition than the essence of a person than their “sum total of knowledge and experience”.  In a more straightforward sense, pills and surgeries or lectures and teaching are scarce. The same pill can’t be swallowed by two people. The material and labor that go into producing those things are also scarce. Resources cannot be endlessly lavished on one area without making other uses of those resources impossible.

When scarcity is involved, we naturally need to ask how we can afford more of something.  Sometimes, the answer is we can't.

The opposite of a politician is entrepreneur.  While politicians ignore scarcity, entrepreneurs are in a continuous dance with scarcity; they face it and deal with it all the time.  Because of that, they do a much better job of innovating ways to deal with scarcity.  The same people who don't hold politicians accountable for promising more than they can deliver will take their business elsewhere if an entrepreneur's product doesn't do what it was promised to do.


Because customers hold them accountable, entrepreneurs also do a much better job than politicians at alleviating scarcity through efficient, value-creating production. Entrepreneurial projects do fail, but then they go away when their customers do, clearing the stage for something better. Since government projects are financed by involuntary “customers” (taxpayers), they are ultimately unaccountable and “free” to fail indefinitely.

Naturally, with a stage full of clowns ignoring scarcity, promising free everything, and ignoring the harsh reality of having to reign in spending, there was no mention of the national debt. 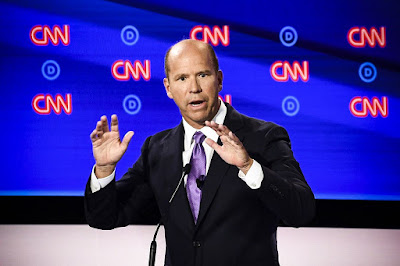 John Delaney - who seemed to understand the resources aren't infinite.