I learned from Gun Free Zone this morning that John Richardson at No Lawyers - Only Guns and Money had his blog shut down.  He's the only one I'm aware of, but I can't tell from my reading list how far that might be going.  I've linked to John's blog for as long as I can remember. 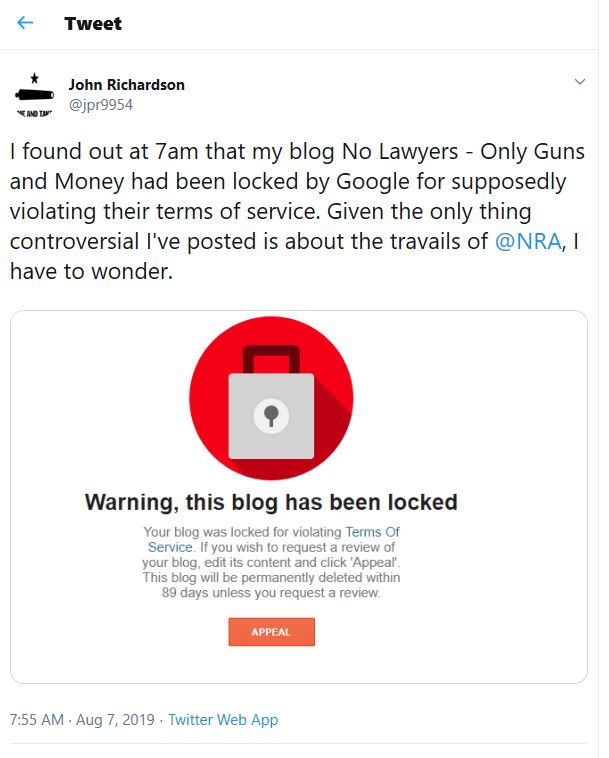 I suppose that Wayne LaPierre, or one of his minions, might have complained to Google because of things he posted that are critical of Wayne, but we don't know that.  I've certainly never seen anything I'd consider out of line for a blog.

I don't have John's contact info, and I'm not on Twatter, so I can't ask him what the story is.  When I go there, I get a Blog Gone message:

Meanwhile, I keep talking about moving off Google, dropping the blog and GMail, and signing up for a more "Do It Yourself" service, but when it gets down to it that sounds like work and I've put it off.

What did John do?  Tell the truth about the NRA?

I haven't said where I stand on the NRA "coup" stuff, but the more that goes on and the more I see, the more I agree with calls for an independent audit.  Maybe Wayne's holding off because he figures the New York attorney general will have them audited and have the New York taxpayers pay for it, instead of the NRA paying for the audit, but I'm convinced that the old adage from the business world applies here: "the appearance of impropriety is the same as impropriety."  If the NRA were a functioning commercial enterprise, Wayne LaPierre would be out.  At some point, and maybe we're already there, Wayne is already costing the NRA too much money in lost donations and lost opportunities.

I really need to get off my butt and get moving to a new system.  Today, the news crossed my path that it's not just gun blogs they're after.  They driving traffic away from "alternative health" sites.  How long until users aren't allowed to talk about anything that isn't approved?