I have to admit I've never heard of this, and the potential is mind-boggling.  Maybe because I come from a state where humidity is one of our major exports, and humidity brings rust.  Maybe because I live in an area where the salt air corrodes away almost anything left outdoors, like aluminum window and screen frames.

Machine Design had short feature piece at the end of last month, about utilizing rust covered iron to generate electricity.


New research conducted by chemists at Caltech and Northwestern University shows that thin films of rust (iron oxide) can generate electricity when saltwater flows over them. These films represent an entirely new way of generating electricity and could be used to develop new forms of sustainable power production.

Interactions between metal compounds and saltwater often generate electricity, but this is usually the result of a chemical reaction in which one or more compounds are converted to new compounds. These reactions are like those at work inside batteries.

The phenomenon is called the electrokinetic effect, and has been observed before in thin films of graphene.  Briefly, the mechanism involves ions sticking to the surface of the rusty iron (adsorption) and then detaching from that surface (desorption).  Saltwater is pumped across the panel.  Positive (sodium) ions in the saltwater are attracted to electrons in the iron beneath the layer of rust. As the saltwater flows, so do those ions, and through the electric attraction, they drag the electrons in the iron along with them, generating an electrical current.

It's about 30% efficient at converting kinetic energy into electricity.  That's more efficient than photovoltaic cells, which practically seem to be around 25%, but I don't know if you can directly compare those.  The article, however gives us a direct comparison to bear in mind.


“For perspective, plates measuring 10 square meters each would generate a few kilowatts per hour, enough for a standard U.S. home,” says Miller. “Of course, less demanding applications, including low-power devices in remote locations, are better candidates for this power source in the near term.”

Recall that the power from solar radiation hitting a solar cell is typically 1.2 kW per square meter, and 25% (1/4) efficiency says to get that 1.2 kW we need four square meters.  10 square meters of photovoltaics (PV) could be budgeted for 3 kW, so those areas aren't really that different.  From what I can tell, the electrokinetic power isn't limited to daylight hours on clear days, so they could generate electricity on rainy days or all night, which is a clear advantage over photovoltaics.


Though rust forms on iron alloys on its own, the team needed to ensure it formed in a consistently thin layer. To do that, they used physical vapor deposition (PVD), which turns normally solid materials (in this case, iron) into a vapor that condenses on a desired surface. PVD let the team create an iron layer 10 nanometers thick. After taking the metal film out of the PVD machine, rust formed spontaneously in air to a thickness of about 2 nanometers.

When the researchers flowed saltwater solutions of varying concentrations over the rust-coated iron, they found that it generated several tens of millivolts and several microamps per square centimeter.

The article doesn't quote any figures on the costs of systems.  A system seems like it would need a pump, a way to get it all started, and some electronics.  For the moment, they're emphasizing off-grid applications.  Some of them very off grid.  Like say, our bodies.  Our bloodstream is largely saltwater with some lumpy stuff (blood cells) in it; what if that saltwater could be used to power an implant?

The paper describing their findings, titled "Energy Conversion via Metal Nanolayers," appears in the July 29 issue of the Proceedings of the National Academy of Sciences. 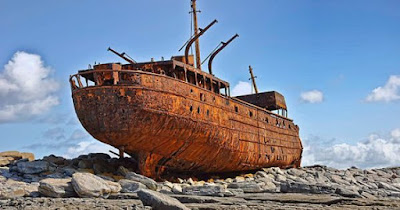 A rusty old ship on the Aran Islands, Co. Galway (source).  Don't think that all ya gotta do is drag it in the ocean to generate electricity.