I've long had a saying while keeping track of hurricane forecasts, "the models giveth and the models taketh away".  For about a day, the forecast landfall moved south of us from the location plotted Wednesday, down to south Florida - somewhere around Palm Beach to Jupiter.  Then the models reeled that back and started moving the path closer to us, went past us and is now well offshore.  The models gave, took it back, then gave something different.

So I don't want to say we don't need to pay attention, but the models and forecasts have been bringing the turn to the north earlier in time by about a day, with the result that the storm appears to be passing us well to sea.  The latest forecast plot. 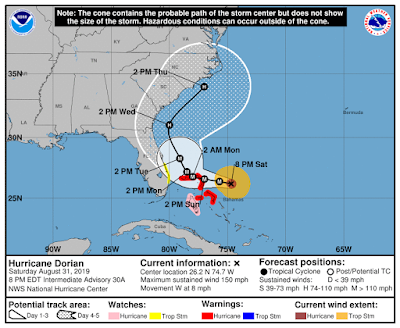 We're still in the Cone of Doom, just south of the bump on the East Coast - Cape Canaveral.  A tropical storm watch comes within 25 miles south of the house and it's reasonable to expect it to extend farther north tomorrow, but I don't bother with shutters for a tropical storm.  My current plan is to get a good look at the morning plots and decide if the shutters go up in the morning.  What I'll be looking for is if the cone shifts left tomorrow.  The path has been looking like this since this morning, and the various models almost all reflect it staying offshore and perhaps offshore the entire US.

This is when we say, "you don't let your guard down until it's about a thousand miles past your location".  It has been hard to forecast so far, and that doesn't fill me with confidence.

The plot of arrival time of tropical storm winds looks to be Monday morning, perhaps as early as 8AM, so any time tomorrow would be good to put up the shutters.  Being August, it's pretty hot when you don't get a cloud, so either up early or late in the day.

Today, I took down my antennas.  The entire installation needs to be examined and a handful of problems from the lightning strike need to be troubleshot and fixed.  My antenna projects always begin with the phrase "when it cools down", which is typically by early November (but can be earlier), and that had been my plan.  Only one antenna was unusable and looked bad with my network (antenna) analyzer (current model) and since I have other antennas, I'm not completely off the air, I already found a problem I didn't even know I had.

So here we are, in the midst of a temporary reprieve, hoping it becomes a permanent reprieve.  Over in the Bahamas, they're preparing for up to 24 hours of category 4 winds.  Honestly, pray for folks there.  From what I know, I'd be surprised to see much standing there by the time the storm clears out.