Hurricane Season Starts to Ramp Up

Those keeping score will know that this hurricane season has been very slow - until this week.  It was off to the slowest start in at least 10 years, with tropical storm Chantal briefly forming August 20th.  This week we started seeing five day forecasts with something forming directly off the east coast of Florida, and it still might, although the rest of our weather forecasts have been stunningly inaccurate.

The low pressure system or tropical wave that is marked by the red X was offshore south Florida yesterday, came ashore and went overhead earlier.  Our local forecast for yesterday was 60% chance of rain.  We didn't even cloud over - the independent forecasters at Weather Underground had our chance of rain at 30% and lowered the number as the day developed. 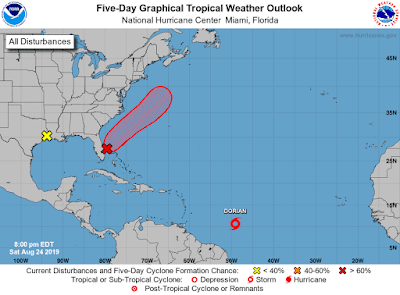 This storm is unlikely to affect any land as steering currents will push it in that narrow red region paralleling the eastern seaboard up to the outer banks and continuing out to sea.

Miguel at Gun Free Zone posts a reminder that today is the anniversary of Hurricane Andrew hitting south Miami in 1992 - and Andrew was obviously the first hurricane of that season.  It's still the worst hurricane in Florida history 27 years later.

Let me draw your attention to the open red circle at lower right in that map above.  That's Tropical Storm Dorian, just named in the 5PM update from the NHC.  The five day forecast cone is keeping it    slightly south of the track Maria took in 2017, but Puerto Rico is well within the cone and close enough to the centerline that they'd better be paying attention.  At least the few Puerto Ricans who didn't move up to Florida.  Maria was a major hurricane, and Dorian is not forecast to get that strong, yet. 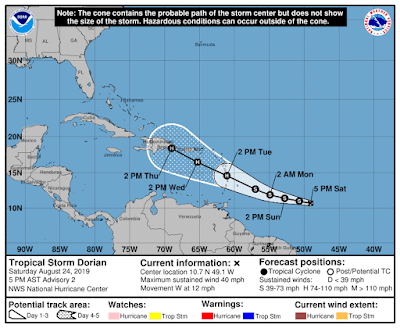 Here on the Space Coast, we don't need to start watching closely until the end of this chart on Thursday, and by that time, it would still be five or more days away.  It looks like Dorian will go through the southern end of Hebert's Box which correlates with strong storms hitting south Florida.  Still, most storms get pushed to the east as they approach Florida, due to upper level winds from an approaching front.

The peak of hurricane season is September 10th and it's just getting cranked up out there.  Time to start paying attention.