We don't have a smart house in the sense that term is used these days.  No self-bugging features like Alexa or the Nest thermostat.  We do, monitor though.  We have some simple wireless thermometers that we use to keep track of the spare refrigerator (which is old and barely still cooling), and the big freezer.  We can read those temperatures from the kitchen.  We have several of the so-called Atomic Clocks which include a temperature sensor in them, so we can look at the temperature in every room if we walk into the room.  We have a digital thermometer that can monitor the temperature where it's positioned.  Plus we have some of the ubiquitous cameras, a smart doorbell and so on.

When we had our lightning strike back on August 1st, among the very first things we found was blown was our central air conditioning thermostat, and it was the first thing we called in to get fixed.  It was repaired within a few hours on the 1st.  It wasn't long after getting that repaired that I started to notice I wasn't as comfortable as I had been in the house.  I felt like it was damper and that I was sweating more than I had been.

The new thermostat is different from our old one in some ways I don't like.  The first thing is that my old thermostat had a setpoint that behaved in a way that I'd gotten used to: the cooling would come on when the temperature reached two degrees higher than its setpoint, the air would cool until it returned to the setpoint and then would turn off.  By contrast the new thermostat triggers as soon as it senses the temperature has gone up one degree - the controls theory term for that is less hysteresis.  The other thing is an annoyance: I could tell by looking at the old thermostat from a few rooms a way that the unit was on by a green LED, and the temperature display had a low level illumination so I could read it at night without turning on a light.  The new one has no indicator light and the panel won't even light to read the temperature without pushing a button.

I spent several hours over the last couple of weeks reading the manual and searching online to see if the central air having a different On/Off hysteresis could make it feel more humid, or if I could change the hysteresis at the thermostat.  No results.  In addition to that we've been setting a temperature and checking it primarily on the clock in our bedroom.  With the old thermostat, we'd find that the temperature in our room was usually two degrees warmer than the thermostat setting.  Lately, the temperature was four degrees higher and some results said it didn't matter what we set the thermostat to achieve, it was always four or five degrees higher.

Around noon, Mrs. Graybeard concocted a brilliant impromptu experiment.  She took the digital thermometer and put it on top of the thermostat.  The thermostat was set to 76.  After a little while to acclimate, the second thermometer read 80.  We experimented with that by changing the thermostat several times.  The comparison thermometer always reads four degrees higher once the cooler turns off and the system fully shuts down. 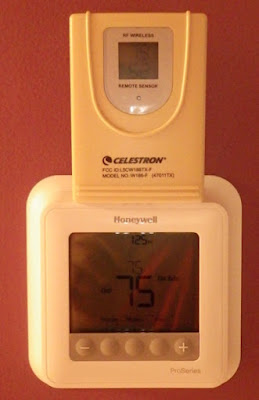 We did this all day.  The main complication I can think of is embedded in the old proverb: a man with two watches never knows what time it is.  Which one is right?  Time for a double check with a completely independent sensor: an old model FLIR One infrared camera for my not-quite-as-old iPhone.  This evening with the thermostat set to 74 the FLIR read the temperature at that location at 78.3.  Case closed.

The thermostat is not really controlling to the set temperature.  Is this another one of those EPA rules like water temperature in the washing machine or dishwasher?

This would explain the difference in my comfort level.  I spent another half hour or hour today looking for settings to fix the thermostat with no success.  For now, I'll simply set the thermostat four degrees cooler than I otherwise would.  There's a possibility it's simply bad, so we'll contact the folks who put it in.