The protests in Hong Kong have been going on since the end of March, so over four months.  The protests initially were directed against a new extradition law that China wants to impose on the formerly sovereign Hong Kong.  Now it seems that those protests have extended to wanting to improve their government.  It seems that the root of the protests is that when China and Great Britain reached their agreement for the transfer of Hong Kong, it was agreed that Hong Kong would be autonomous; "one country, two systems" for 50 years.  Here, not quite halfway to 2047, the Chinese have been abandoning that.

China has been staging units of the People's Liberation Army (PLA) as a warning to the protesters.  Tuesday morning (last night US time), the PLA began a show of force of the preparations. Conservative member of the British Parliament Daniel Hannan tweeted an ominous video from the Chinese side of the border with Hong Kong: 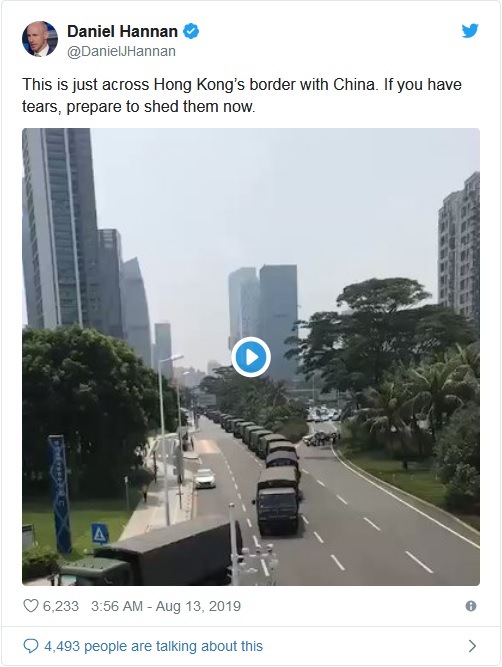 The eight second video shows troop carriers and support vehicles as far as the eye can see in two directions from that vantage point.   The Chinese government released this video, showing the vehicles going to Shenzen, on the border.


From my standpoint, the protesters' chances are grim.  They're under a government that's pro-China (or else they wouldn't be allowed to be there) and are protesting the Chinese (mainland) government that killed 10,000 in the 1989 Tiananmen Square protests for Democracy.  Communist governments don't have much history of listening to protests and thinking they might be wrong - like all leftists, the Chinese party leaders consider themselves better than the common people.

Rick Moran, writing at PJ Media has this summary, with a quote from the South China Morning Post:


The protesters are demonstrating against a bill that would allow citizens of Hong Kong to be extradited to China for some crimes. This is a direct attack on Hong Kong's special status within China, and the Communist leadership fully realized it when they proposed it. Little by little, the protesters are seeing Beijing stifle the freedoms that citizens of Hong Kong were guaranteed when Great Britain returned the territory to China in 1997. Beijing underestimates their resolve at their peril. That much has been made clear by the protesters themselves.


Today, this chant is heard everywhere on the streets: “Liberate Hong Kong, the revolution of our times.” When Edward Leung  invented this rallying cry three years ago, the cause of “revolution” – whatever he meant it to mean – did not resonate. It gains traction now, not because the likelihood of its success is any greater or any less unrealistic, but because recent  responses by our government have made it clear that what protesters (and I believe the rest of Hong Kong) have demanded, namely democracy, autonomy, and above all, good government, will never come to be unless and until the current political order is turned on its head.

The problem for the protesters is that to "turn the political order on its head," there will almost certainly be a lot of blood in the streets before that happens.

A pundit on the news today said (approximately, from memory), "giving Hong Kong to China was like giving a Stradivarius to a chimp."  China, with their puppet Chief Executive Carrie Lam, has filled the protesters with resolve.  The protesters probably see they have no future if things continue the way China is pushing.  If they feel they have no future and nothing to live for, I don't expect this to be over very soon.  Unless the Chinese PLA kills them all.

There was talk when Great Britain and China agreed to transfer Hong Kong back to China that China would take the role model of Hong Kong and make China more like Hong Kong, improving the lives of over a billion people.  In reality, they're going to make Hong Kong into China.