The Kerfuffle Over Interest Rates is Telling Us Something

The popular story is just fodder for the news media to bash Trump about.  If you look deeper than the headlines, it's a perfect example of why we need to end the Federal Reserve.

I know I've written about this before, and a search shows I did a piece last July, almost exactly 13 months ago.  I understand why Trump thinks what he does.  The Fed practically gave Obama his second term by figuratively air dropping money as we always used to say about Helicopter Ben Bernanke.  The difference is that if money really were dropped from helicopters, it would have been more equitably distributed than the 6 to (as much as) $8 Trillion dollars created by quantitative easing; that money exclusively went to big banks, big Wall Street firms and the extremely well connected and rich.  About a third to a half of that went to banks in other countries to keep them afloat.  Where does the US Federal Reserve Bank get the authority to create money for foreign entities.

As Dr. Mark Thornton noted in "The Skyscraper Curse":


"A monetary system that is dominated by a central bank, such as the Federal Reserve, and uses fiat money, as in our current monetary system, can expect to benefit certain people, such as bankers, financiers, and people with debt. Likewise, because such a system is inflationary, it tends to hurt wage workers and savers. Such a system can be expected to hurt the lower-and middle-income classes and enrich those in the financial industry and the upper-income class.

A gold standard has historically had a tendency for prices to be stable or slightly deflationary. This means that wage rates, cash balances, savings, and bonds tend to gain purchasing power over time. This type of monetary system rewards the hard-working and frugal classes, which leads to an expansion of the middle-income class and the economy."

I understand where Trump is coming from.  He's naively thinking, "if the Fed did for me what they did for Obama, I'd win by a Yuge margin".  It's a truism that people generally vote their wallet and blame the president for the economy.  If things are good, they vote to reelect; if things are bad, they vote for a new guy.  The (supposedly not political) Federal Reserve helped Obama, why not him?

The ugly truth is that the Fed had expanded their balance sheet so much in the wake of the 2008 collapse that they had to "unwind" it from a practical standpoint.  They had to raise interest rates and do some quantitative tightening to reel some of that $8 Trillion worth of digitally created cash back in, and generally do the austerity program that they began when the economy started doing much better under Trump.  In reality, they barely started.

Nobody asks, "why are bankers doing anything for any president?"  Nobody is asking, "how does the Fed Open Market Committee know what the Prime Rate should be?  Shouldn't that be between buyers and sellers?"  The prime interest rate is among the most important pieces of information in the economy.  It sets the price of money which flows into an almost unlimited number of decisions.  Why should a group of unelected bankers have that much power?  In a country that allegedly promotes free markets, why is banking run like the Communist Party of China?  The mere fact that both the US and the People's Republic of China have the same structure with the Federal Reserve Bank here and the People's Bank of China there should be a shocking revelation, not the "ho-hum" it gets.

As I've said many times, the Federal Reserve Bank and all central banks are the worst bit of central planning that the entire world has fallen for and I believe they're not just unnecessary they're damaging.  The only things they add to the financial world are all the things wrong with the financial world: destructive levels of debt, countries engaged in constant currency manipulations to try to get an advantage over each other, the creation of money out of nothing, money as debt rather than asset, the destruction of the information channel in monetary transactions.   Everything that's wrong with the world's economies goes back to central banks. 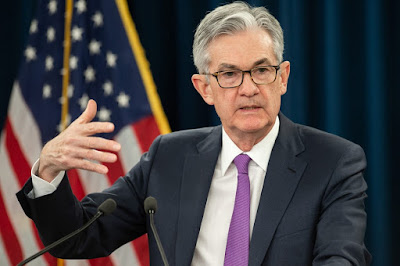