ICYMI: Dick's Sporting Goods Continues to Be Their Namesake

In case you missed it, Dick's Sporting Goods is apparently considering ending all gun sales.  This isn't really surprising, after all.  Dick's ended sales of the AR-15 at all of their stores, including the much smaller Field and Stream chain, after finding the killer from the Parkland Marjory Stoneman Douglas high school shooting legally bought a gun from a Dick's in November.  Many of you will remember they temporarily stopped sales of AR-15s after the Sandy Hook shooting in 2012.  This year, they started shutting down gun sales in some stores, saying they're ending all gun sales in 125 stores to start and apparently intend to get completely get out of the market.


“We did have a conversation about that [stopping all sales],” CEO Ed Stack told CNN Business earlier this year. “At the time we felt it was a part of our DNA and we should stay in it. So many people in the country are law-abiding citizens who use firearms to hunt, to use from a recreation standpoint. We didn’t think it was right to exit the business completely.”

That could be changing. Dick’s, one of the country’s biggest gun retailers, has been quietly testing the water on whether to pull out entirely from what it calls the “hunt” business, including firearms. An announcement with the results of the test is expected Thursday, when it is set to report quarterly results.

Dick's has been the poster child for "Get Woke, Go Broke" with earnings down since their decision to drop the AR-15.  They counter that with a story that dropping gun sales is turning out to be good for business.  According to The Hill:


The sports and outdoor retailer reported a sales increase of 3.2 percent nationwide, which the company attributed to solid performances in e-commerce, in-store sales and apparel sales while noting in a revenue report that the company was “continuing the strategic review of its hunt business."

They claim stores that replaced firearms with locally targeted merchandise outperformed other locations.  It's conceivable that strong 2A supporters walked on Dick's and don't buy anything there while some people increased their shopping due to better deals or simply finding Dick's the only source for whatever that "locally targeted merchandise" is.

Retail sales of any kind is a rough business.  Margins aren't very big and the competition is intense.  It seems to me that companies should be trying to give shoppers a reason to come into their store, not a reason to avoid them.  They seem to be betting that they can grow new customers to replace the ones they've lost.  I'm sure there are people who will never go there again, I swore them off after Sandy Hook, but I also know a lot of people just buy wherever they find the best price. 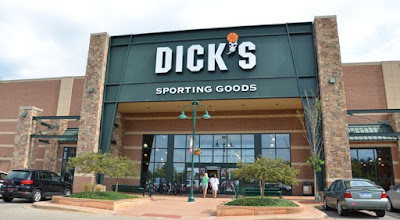