Because of Global Warming We Need Zepplelins! Or Something Like That

A friend sent me this story from NBC Mach.  It's actually a pretty amazing story; I went from bemusement to confusion to asking "WTAF?" all in the space of the few screens of text.

Let me sum it up for you.  Container ships now carry a large amount of cargo around the world, but they burn diesel fuel and carbon is bad!   So we need to build floating airships - a mile and a half long - to carry that cargo around the world.  Because west to east travel is "free" and low pollution, "all we gotta do" is get those floating cargo ships into the jet stream, somewhere between 20,000 and 42,000 feet up (or between four and eight miles if you prefer).


As proposed in a recent scientific paper, the new airships would be 10 times bigger than the 800-foot Hindenburg — more than five times as long as the Empire State Building is tall — and soar high in the atmosphere. They’d do the work of traditional oceangoing cargo ships but would take less time and generate only a fraction of the pollution.

“We are trying to reduce as much as possible emissions of carbon dioxide because of global warming,” said Julian Hunt, a postdoctoral fellow at the International Institute for Applied Systems Analysis in Laxenburg, Austria, and the paper’s lead author.

(Note, I do hate to be pedantic, but when they say, "generate only a fraction of the pollution", 2/2 is a fraction.  So is 4/2.  They don't mean what the author implies, but they are fractions)

The jet streams are a permanent part of the atmosphere but they aren't fixed in a geographic place or in their exact route.  They move north and south with the seasons, and move around with weather systems, sometimes taking huge omega shapes, sometimes being relatively straight; sometimes blowing several hundred mph, sometimes under 100.  Sometimes they can be relatively smooth flow, but at other times can be turbulent, swirling winds.  They're often referred to as rivers in the air, and their behavior can be similar to rivers in how the flow rate changes with the season and conditions.

If you're like me, you might well be saying, "Wait!  Zeppelins a mile and a half long?  How much cargo are they talking about carrying?  I want to see neat 'artist's concept' drawings of an 8000 foot long air ship."  I went to the article linked in that first indented paragraph, but there were no drawings, just a table that shows they envision an airship 10x the size of the Hindenburg: 2453 meters (8048 feet) long and 412 meters (1352 feet) in diameter.  Such a ship would be expected to carry:
That 21,000 ton cargo lift is 625 standard 20 foot cargo containers.  The earliest generation cargo ships would handle 500 to 800 of those 20 foot units (the industry abbreviation is TEUs).  Later generation ships carry 5000 or more, up to 8000 TEUs, so while 625 sounds good, compared to the oceanic freighter fleet, many more zeppelins would be required. There are container ships that can carry ten and twenty thousand TEUs.

Now the references to the Hindenburg might be something you'd expect them to avoid, since there's that unfortunate, almost universal memory of the ship crashing and burning on its final flight, but that's not where Dr. Hunt is going.  See the Hindenburg's explosion prompted the abandonment of the hydrogen system that the Hindenburg used for buoyancy and replaced it with helium as used in today's lighter-than-air craft like the Goodyear blimp and others that are in service today.  But Dr. Hunt proposes these mile and a half long, 35,000 ton craft be run on hydrogen!


But for all their high-tech advances, Hunt said, the new airships would still get their buoyancy from hydrogen, a highly flammable gas that is 14 times lighter than air. It’s the same gas the Hindenburg and the other big zeppelins used in the 1930s.

The possibility of another giant explosion has some pushing back against an airship renaissance.

“There is a resistance — because of the Hindenburg — to big bags of hydrogen,” said Eric Lanteigne, a professor of mechanical engineering at the University of Ottawa in Canada, who was not affiliated with the new research. He said that’s why the Goodyear blimp and other small airships now operating are filled with helium, the harmless gas found in party balloons.

But if helium offers a greater margin of safety, it’s expensive and hard to come by. It’s found only in pockets of natural gas deep underground, with its extraction usually a byproduct of highly polluting drilling. Hydrogen, on the other hand, can be extracted from water and so would much cheaper.

Did you catch the insult of "highly polluting drilling"?  The article is peppered with things like that and it gave me the impression that this Dr. Hunt believes he will be the one to Save the World.  So yes, they can electrolyze water to produce hydrogen and liberate oxygen (or store it for other use), but that's not a "free" process and I'd like to see numbers for their "would be much cheaper" claim.  It takes energy input to break water apart and that energy will come from somewhere.


To minimize the risks associated with hydrogen, Hunt envisions getting rid of the crew. The airships would operate autonomously — and would be loaded and unloaded by robots.

“The idea would be that the whole process would be automated so that in case you have an accident, no one will be injured — only the equipment and the cargo,” Hunt said, adding that some of the hydrogen in an airship could be used to power an on-board fuel cell that would spin the craft's propellers.

As an additional bonus, Hunt said, the fuel cell would generate as a byproduct water that could be released as the craft passed over regions hit by drought.

That last paragraph strikes me as salesmanship again.  "And if you're having a drought, we can make it rain!!"

The middle paragraph hints at what gets me.  Call me skeptical, but "what goes up must come down." They're talking about putting not one, but dozens or hundreds of these 35,000 ton behemoth aircraft and their cargo into the air 4 to 8 miles up, with minimal propulsion so they save emissions, bobbing along in a turbulent, swirling, "river in the sky" and they're worried about the hydrogen?  How about worrying about having a shipping container fall into a building?  Or having all of them fall into a city? 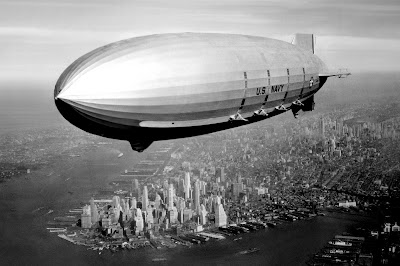 My take on cargo container ships is that they've changed our world radically and are "unsung heroes" of modern life.  Considering it can take them over a mile to stop or accelerate to their traveling speed, they're not ocean-going hot rods.  They're ocean going long-haul trucks.  They're powered for what they need to do.