NASA, SpaceX to Work on Refueling in Space

On Tuesday afternoon, as part of an announcement of 19 different public/private sector partnerships with 10 different companies, NASA announced that SpaceX and two NASA centers, the Glenn Research Center in Ohio and the Marshall Space Flight Center in Alabama, would work together on space-borne refueling systems.


"SpaceX will work with Glenn and Marshall to advance technology needed to transfer propellant in orbit, an important step in the development of the company’s Starship space vehicle," the NASA news release states. This is a significant announcement for reasons both technical and political.

For its part, SpaceX welcomed the opportunity to help advance NASA's Artemis Program, which NASA hopes will send humans to the Moon by 2024 (and, later on, to Mars). “We believe SpaceX’s fleet of advanced rockets and spacecraft, including Falcon Heavy and Starship, are integral to accelerating NASA’s lunar and Mars plans," a company spokesperson told Ars.

Much as aerial refueling seems essential to extending the ranges that aircraft can achieve, refueling in space has long been considered necessary for deep space missions.  One of SpaceX's principal engineers behind the Starship project, Paul Wooster, has said that he has estimated five Starship launches worth of fuel (as payload) would be required to refuel a single Mars-bound Starship in low-Earth orbit, and this would involve the transfer of hundreds of tons of methane and liquid oxygen. NASA's Bobby Braun, a former chief technologist at NASA who is now dean of the College of Engineering and Applied Sciences at the University of Colorado Boulder has said,


"I’ve got a stack of studies that go from the floor to the ceiling that list the critical technologies needed for humans to become long-term explorers in deep space, and in-space refueling is always on the list."

The new partnership recognizes SpaceX's maturity as a leading space transportation company, Braun said. And Glenn and Marshall are the right centers for SpaceX to partner with, even if there simultaneously exists a strong rivalry between SpaceX's low-cost rockets and Marshall's lead development of NASA's Space Launch System rocket. 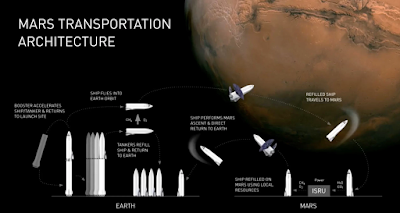 SpaceX graphic of the need for refueling in a Mars mission.

As part of that "stack of studies" Braun mentions, NASA has previously done considerable work studying the handling, transfer of, and storage of rocket fuels such as liquid oxygen, hydrogen, and methane in space—they are difficult to work with and susceptible to boil off in the space environment (hydrogen atoms are so small they can even migrate directly through metal fuel tanks).  Under the new agreements, NASA civil servants and SpaceX employees will work together, each side paying their workers from the joint effort funds.


"The civil servants at Marshall and at Glenn are very talented in this area," Braun said. "The people at SpaceX clearly know their system, both the capabilities and the needs of the Starship architecture. The fact that they’re all going to get together in the same room, and work on the same problem, that’s tremendous." 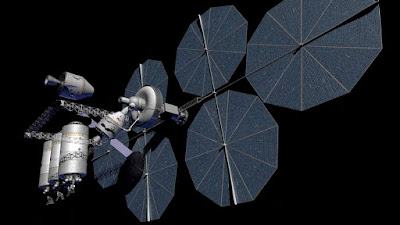 NASA concept for an orbiting refueling station with a set of propellant and oxidizer tanks.

As with all government programs, politics plays a large part in this effort.


Braun served as chief technologist in 2010, back when the Obama administration created NASA's Space Technology program to foster just this kind of innovation in America's private space industry. It was a contentious time in space policy, as the White House was pushing for more funding for new space companies—and new space ideas such as fuel-storage depots—while Congress wanted to keep NASA in the rocket-building business.

In 2010, Spacex had been flying the Falcon for two years and it was hardly the commercial/technical success it has turned out to be, so the desire to keep NASA launching rockets was understandable.  We've covered the influence of Alabama Senator Richard Shelby in getting NASA's SLS rockets funded and keeping the program going.


The potential of in-space fuel storage and transfer threatened the SLS rocket because it would allow NASA to do some exploration missions with smaller and cheaper rockets. As one source explained at the time, "Senator Shelby called NASA and said if he hears one more word about propellant depots he’s going to cancel the Space Technology program."

The line from other NASA officials was that as a technology, propellant depots were not ready for prime time. In 2011, former NASA Administrator Mike Griffin and current Executive Secretary of the National Space Council Scott Pace—both SLS advocates—wrote a withering criticism of the technology for Space News.

"Fuel depots as an element of a near-term space architecture are an example of magical thinking at its best, a wasteful distraction supported by the kinds of poorly vetted assumptions that can cause a concept to appear deceptively attractive," Griffin and Pace wrote. Ironically, their chosen heavy-lift rocket for use in NASA's "near-term" architecture, the SLS rocket, remains badly behind schedule and over budget. It is unlikely to fly meaningful exploration missions for at least three or four more years and is holding up the Trump administration's Artemis plan.

Charles Miller, a consultant to NASA in the 2011 time frame, was among those performing studies to show that the use of propellant depots could significantly lower exploration costs for NASA. On Tuesday, he praised the Trump administration and NASA chief Jim Bridenstine for putting the Space Technology program to good use.


"Administrator Bridenstine is clearly executing on President’s Trump’s guidance to increase commercial public-private-partnerships at NASA," Miller, now chief executive of UbiquitiLink, told Ars. "The game-changing technology that NASA has discovered is capitalism. This program proves NASA leadership has figured out the future is reusability mixed with commercial public-private-partnerships."

In my way of looking at it, if a Mars mission is necessarily going to be a long duration mission, what they really need are ways to manufacture methane and liquid oxygen on Mars rather than take everything they ever need with them.  That would bring the vision of extended settlements to fruition faster. 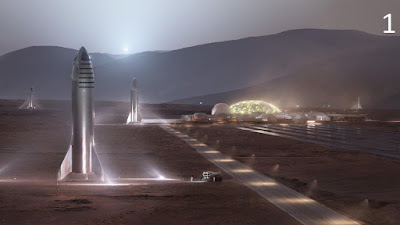 SpaceX concept artwork of a manned outpost on Mars with four Starships visible among the acres in the settlement.