The SpaceX Falcon at 10

On September 28, SpaceX and industry watchers quietly commemorated the 10th anniversary of the first launch of the Falcon 1, the first version of the SpaceX booster that is quietly forcing the rest of the world to play catch up; even the Russians announced plans to develop a reusable booster to keep up with SpaceX.  Ars Technica passes on the story of the eight desperate weeks that saved SpaceX from ruin.


Three times, in 2006, 2007, and 2008, SpaceX tried to launch a Falcon 1 rocket from Omelek Island in the Pacific Ocean, a coral shelf perhaps a meter above sea level and the size of three soccer fields. Less than two months after the last failure, the money was running out. SpaceX had just one final rocket to launch, with only some spare components left over in its California factory.

“We all knew that the stakes were incredibly high,” Zach Dunn recalled of that feverish period in 2008. This time, the Falcon 1 had to work. And the kids knew it. Barely a year out of graduate school and just 26, Dunn nonetheless was a senior engineer over the rocket’s first stage. “It was tense. There was a lot of pressure.”

Omelek was a temporary facility; so small it's uninhabitable during a launch.  Omelek was a place where they lived dormitory style and worked tirelessly in preparation for the launch (as have generations of other folks at NASA, in Russia and the rest of the launch industry).  Before launch, everyone evacuated the smaller Omelek to go the control center on nearby Kwajalein - "Kwaj" - one of the best-known pieces of "downrange test facility" in the Pacific.

The pressure was intense.


They bunked in a double-wide trailer, cramming inside on cots and sleeping bags, as many as a dozen at a time. In the mornings, they feasted on steaming plates of scrambled eggs. At night, beneath some of the darkest skies on Earth, they grilled steaks and wondered if the heavens above were beyond their reach. Kids, most of them, existed alone on a tiny speck of an island in the middle of the Pacific Ocean. It was the middle of nowhere, really.

And they worked. They worked desperately—tinkering, testing, and fixing—hoping that nothing would go wrong this time. Already, their small rocket had failed three times. One more launch anomaly likely meant the end of Space Exploration Technologies.
...
Today, it is difficult to imagine the world of aerospace without SpaceX. United Launch Alliance, Arianespace, the Russians, and the Chinese likely would still dominate the launch industry, with their prices a closely guarded secret. A decade ago, these industry titans saw in Elon Musk just another gnat to be swatted aside like so many who had come before. The idea of reusing an orbital rocket to lower the cost of access to space? Laughable. Mars?!? This funny sounding guy from South Africa couldn't even put a small, single-engine rocket into orbit.

This, and more, lay on the line September 28, 2008, when SpaceX sought to finally become the first company to privately develop a rocket that successfully reached orbit.

“That's something that only nations had done before, because the barriers to entry were so high,” Chad Anderson, of the Space Angels investment group, said about privately developing an orbital rocket. “Going from zero to one is really, really difficult. And that’s what SpaceX did. That guy and that company have been swimming upstream, and fighting, for so long to get that ball rolling.” 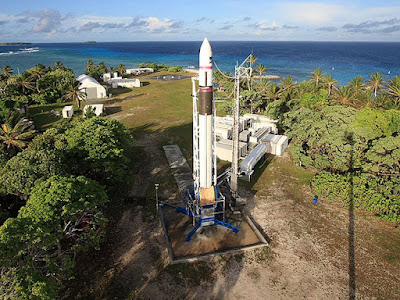 Falcon 1, vehicle 4, just prior to the first launch, on the pad on Omelek island.

It's hard to overestimate the importance of this successful launch.  Every engineer on the team was literally betting their futures on being able to do it.  Even Musk says that if they hadn't succeeded, it probably would have been the end.  Instead, they got a contract to launch the Malaysian RazakSAT satellite into orbit on the Falcon 1 in 2009.  Chad Anderson, of the Space Angels investment group, says that turned the launch business, which he termed "essentially a cartel", upside down.


“To launch a satellite before SpaceX, money had to be no object,” Anderson said. “It could be $90 million, or $170 million, or whatever they happened to want that day. These are incredibly formidable barriers to entry for a new venture.”

Price transparency, and SpaceX’s introduction of the Falcon 9 rocket in 2010 at a price of $60 million, helped bring down these barriers to entry. Over time, this unleashed a wave of innovation in satellites and brought spaceflight into the realm of wider entrepreneurship.

Anderson said that, before SpaceX began flying the Falcon 1 rocket, there were a few dozen privately funded companies, globally, engaged in spaceflight activities. Today, there are 350, and they have raised $15 billion in private capital.

Today, SpaceX is flying the 5th version of the Falcon 9, so named because it uses 9 of the Merlin engines that carried the Falcon 1 into orbit.  Many, though not all, Falcon 9 boosters can be recovered - it depends on the launch energy requirements (essentially the weight of the payload to orbit and the exact orbit required).  Just as it took them a few tries to get their first successful launches, it took a few before they successfully landed boosters.  Now they're making the recovery of the booster seem pretty routine.  Flying a recovered booster is cheaper for the customer, so several have flown and been recovered more than once. 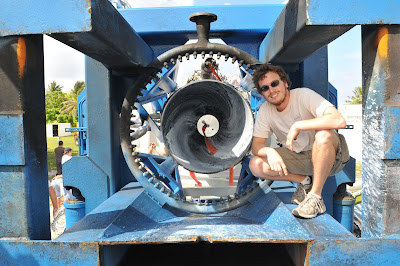 Engineer Zach Dunn with the Merlin first stage engine that later carried the Falcon 1 into orbit.  At the time, Dunn was 26 and just out of graduate school.  Within a year, he was in charge of the first stage.

Posted by SiGraybeard at 7:30 PM