Remember a few years ago when people talked about using road and sidewalk surfaces for photovoltaic cells?  Well, a few experimental installations have been done and they really suck.

I know: what a surprise?  Who would have guessed? ... I mean besides the groups getting some gubmint money to install them.

A little thought by someone who has seen solar cells used properly will give a handful of reasons why it's a bad idea.   The most obvious one is dirt.  Roads get dirty, covered with snow drifts or wind driven sand, for example, and small amounts of light being cut off by dirt have large impacts on the efficiency of the cells.  Next most obvious is the mounting angle.  To be perpendicular to the light of the sun (max intensity and energy transfer), the cells should be mounted at the complement of the latitude.  In the areas where the sun is most intense, the cells would need to be 25, 30 or even 35 degrees from the vertical, or 55, 60 or 65 angles to the horizontal.  Cars can't drive on that.  Instead, they'll be at road grade, flat to within less than 20 degrees in most places.  Finally, they'll need to be mounted under glass strong enough to support the cars and trucks that travel that road.  Thick glass will further reduce the light converted to electricity.

A study reported in the Herald Sun news from Australia goes over some results.  Warning for odd units ahead.

While the road is supposed to generate 800kWh/day (kilowatt hours per day), some recently released data indicates a yield closer to 409kWh/day, or 150,000kWh/yr.

....The road’s capacity factor — which measures the efficiency of the technology by dividing its average power output by its potential maximum power output — is just 4 per cent.

Oops.  For comparison, the Herald Sun reports on a solar panel installation in the Bordeaux region of France, in a place called Cestas.  This plant was designed with rows of solar panels carefully aligned at the proper angle towards the sun, not to be driven on.  It has a maximum power output of 300 Megawatts (300,000kW) and a capacity factor of 14 per cent.  At a cost of €360 million ($A581 million), or €1200 ($A1938) per installed kilowatt, one-tenth the cost of the solar roadway, it generates three times more power.

While it's not surprising that this insanity has spread to the US, it was a little surprising to me that a small pilot project was done in small town, Idaho, specifically Sandpoint, Idaho.

1.5 kW is a rather small project, so I'd have to guess some sort of "proof of concept", but at 20x the per-kW cost of the Cestas facility (and at a similar latitude as Cestas, 48N for Sandpoint vs. 45N for Cestas), clearly not a good use of funds.


And this is before we look at the actual data from the Sandpoint installation, which generated 52.397kWh in six months, or 104.8kWh over a year. From this we can estimate a capacity factor of just 0.782 per cent, which is 20 times less efficient than the Cestas power plant.

I should note that in the photo of the Sandpoint square road (and sidewalk!) you'll notice traffic lines, speed limits and other information from LEDs embedded in the roads.  While it's a nice touch, in the brutal reality of energy input/output they must be budgeted for.  It turns out the LEDs use 25% of the power the road generates.

Final words to the Herald Sun:


That said, it should be pointed out that this panel is in a town square. If there is one thing we can conclude, it’s that a section of pavement surrounded by buildings in a snowy northern town is not the best place to locate a solar installation.

However, perhaps there’s a bigger point — solar roads on city streets are just not a great idea. 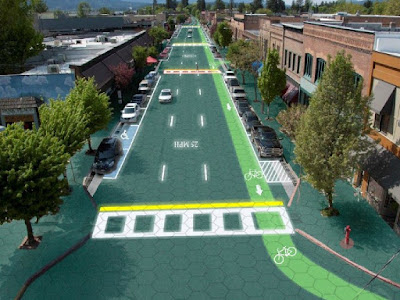