No matter what I say to the tech or person checking the list, it never seems to get fixed or get better.  I fully expect that if I end up in the hospital for some sort of emergency - like when I had my gall bladder out in June of '16 - they're going to read that I'm taking ... I don't know, something ... and treat whatever I have wrong because of that kind of lingering misinformation.

I'm not in that line of work, so maybe I'm talking out of my butt, but it's the case both for Mrs. Graybeard and I.  That sneaking suspicion that it's all wrong got my interest when I saw a headline, "Would You Trust an App to Protect Your Medical Records?" in Machine Design.  The emphasis, though, isn't unscrewing our records, it's securing their privacy.

Blockchain is most associated with cryptocurrencies; it's how they work.  Blockchain is an encrypted ledger of digital transactions, a group of these transactions is a block, distributed across a chain of multiple nodes through a peer-to-peer network.  Part of the distributed nature of the blockchain is that it leaves an auditable log trail of the events taking place.  Every entry in the ledger is irrevocable, tamper-proof, and shared among authorized parties in a transparent manner.  I can see the usefulness here, but in the case of my mangled history of prescriptions, the issue isn't things being added without authorization, it's inappropriate things being added - or appropriate things being added that shouldn't be permanent.


The technology allows every member that can submit information to have their own copy of the ledger, rather than having all the data hosted on one centralized location. Nevertheless, no new transaction can be input, or data committed, without the majority of nodes agreeing that it is indeed accurate.

This could impact the healthcare industry greatly, as often every such organization has its own version of a patient’s records, and it is common for these entities to have differences between each record without streamlined verification. Therefore it is often the case that if a patient visits several different healthcare providers, each and every record they have can be different from one another, which could create massive complications for their personal health. [Note: emphasis added - SiG]

Bingo!  Now you're talking.  This bold text is exactly what I'm talking about.

The article then goes on to give a brief overview of a few companies trying to create this medical blockchain industry, MediBloc, Dentacoin and Medicalchain.


MediBloc aims at putting patients in charge of managing their own medical records, enabling them to exercise ownership and control over their data, as well as who has access to it. Users have full access to their data and can make a conscious choice over who is authorized to view and edit it—from individuals to research institutions and private corporations.
...
Dentacoin, as you might guess, is aimed at dental records. Dentacoin is a decentralized dental health database which stores patient data in a secure and reliable way. It is fully controlled by the users; only they can decide what to store in the database and who has access to it.
...
The database, developed by Medicalchain, allows users to give permission to medical professionals (doctors, hospitals, labs, pharmacists, insurers, and so on) to access the data they have entered on the platform. Each and every access of the data is logged—making it auditable, transparent, and secure—by having it recorded as a transaction on the Medicalchain’s distributed ledger. The patient’s privacy is protected throughout the entire duration of this process. 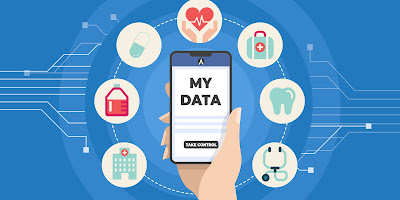 The article uses the rhetorical question, "would you trust an app to protect your medical records".  I can't say that I particularly trust the medical professionals that have custody of them now, but I don't know this is any better.  I also don't know if it's any worse (as always, the internet meme works here: "when I said 'how bad can it get', that wasn't meant as a challenge).


... if a patient visits several different healthcare providers, each and every record they have can be different from one another, which could create massive complications for their personal health.

I'm going to swag that something like this might be coming.  If you have a personal issue with your medical records being on a computer on the network, that ship sailed long ago.  In principle, it's a really good idea that any doctor who sees you should get access to important things about you, especially should you be unconscious in an Emergency Room.  My biggest issue is that the information really needs to be right.