The "Making Cars Noisier Act of 2010" Moves Toward Implementation

In 2010, the US Congress acted on a problem that very few of us knew existed: electric cars are too quiet, especially at low speeds, and therefore pedestrians and bicyclists are more likely to get hit by an electric car.  The answer?  Make electric cars noisier.  That raises the questions of exactly how noisy and exactly what kinds of noise.  After years of study, it appears they've started ruling on just how to fix this.


A 2009 study by the U.S. National Highway Traffic Safety Administration (NHTSA) found that crashes involving pedestrians and bicyclists have higher incidence rates for EVs than internal combustion engine (ICE) vehicles in low-speed vehicle maneuvers, such as reversing or leaving a parking zone. These accidents commonly occurred in zones with low speed limits, during daytime and in clear weather.

The study revealed that an EV is two times more likely to be involved in a pedestrian crash than a conventional ICE vehicle when it’s slowing or stopping, backing up, or entering or leaving a parking space. Vehicle maneuvers were grouped in one category considering those maneuvers that might have occurred at very low speeds where the difference between the sound levels produced by the EV versus ICE vehicle is the greatest.

To be honest, the law wasn't called the "Make Cars Noisier Act of 2010", I made that up.  It sounds more truthful to me than the Pedestrian Safety Enhancement Act (PSEA) of 2010, enacted into law in January 2011.

Stop and think about this for a second.  Something virtually every engineer learns deep into the core of their being is engineering is all about optimizing solutions for problems.  There's very rarely a single "best" way to solve any given problem.  If there was, it wouldn't be a design decision: everybody would do it the best way.  Instead, engineering is the art of optimization, or negotiation, if you will.  In this case, the cars were optimized for technical goals that electric car buyers shop for, such as being "greener" than their neighbors' cars or how many miles on a battery charge.  The EV designers optimized those and it allowed the cars to get quiet.  "Too" quiet (to quote too many movies).


The NHTSA found that sound produced by an EV is from its tires, the air, and sometimes the whine of its electronics. If the car was going fast enough, tire noise was usually enough to warn pedestrians and bicyclists of possible danger. When an EV moves slowly, its generated noise is barely noticeable, posing a danger to anyone nearby. To be safe, a slow-moving EV should produce a sound that indicates:
The generated sounds would be heard frequently even in light traffic and continually in heavy traffic, so they must not be annoying. Also, the generated sound should be different from sirens, horns, and backup signals, all of which are intended as aggressive warnings. The challenge for EVs is to make sounds that alert and orient, but not annoy.

This sounds like a job for The Federal Government!  In this case, as embodied by NHTSA.  NHTSA (by the way, that's pronounced "nits-a", short a) spent years studying the sounds electric cars should make and issued Federal Motor Vehicle Safety Standard (FMVSS) No. 141: Minimum sound for hybrid and electric vehicles over a year and half ago in December 2016.   They followed the standard government "Administrative Procedures Act" with a Notice of Proposed Rulemaking, a comment period, a review of comments, a revision that accepted some proposed changes and rejected others, eventually resulting in the final version.


Effective April 27, 2018, all hybrid and electric vehicle regulations were amended and will be applicable beginning on September 1, 2020. The initial compliance date for newly manufactured vehicles under the 50% phase-in as specified in FMVSS No. 141 is delayed by one year to September 1, 2019. Petitions for reconsideration of this final action were due by April 12, 2018.

I can't tell you how much I'd like to include samples of all the possible sounds cars will be required to produce, but the original source article didn't include any sound samples.  It does, however, include some of the minutia that makes government standards organizations fun.

The whole detailed section is too long to excerpt here, but I really recommend you read it if you find this stuff at least half as funny as I do.  I'll just drop a couple of paragraphs here about how Nissan addressed making their cars noisier.


Nissan unveiled the IMx, its newest electric concept that sings. It emits a noise like a demonic string quartet tuning its instruments. Nissan calls the feature Canto—which literally means “I sing” in Italian—and it’s built to alert pedestrians that the very quiet electric vehicle is coming, even at low speeds.

Nissan released its first pedestrian warning with the 2011 Leaf. The Canto concept improves on the model, adapting its tone and pitch to the car’s actions—accelerating, decelerating, or backing up. The carmaker's designers of course wanted to create noises that put pedestrians on high alert, but were careful to design sounds that “enrich the aural environment of the typical city street,” according to a statement. If a city street naturally sounds like the warm-up room at an ‘80s synth rock convention, this Nissan crossover concept should fit right in. 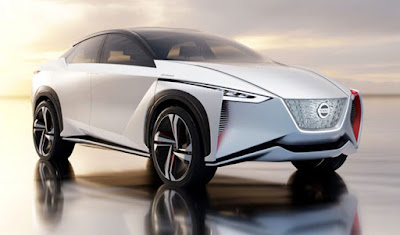