Hold the jokes about making one from a shovel, or wondering if they keep running after being submerged in mud.  They're being serious.


Design of the CV-1 is said to be inspired by a Soviet-era hatchback model IZh 2125 “Kombi” developed in the 1970s , which itself resembled a vintage Italian Fiat 124, the model used as the reference design to create Russia's Lada.

According to the holding company Kalashnikov Concern, the car has a range of 350 kilometers (217 miles) between battery pack recharges and can accelerate from 0-100 kilometers per hour (62 miles per hour) in six seconds.

Those numbers are pretty impressive.  A Nissan Leaf (fully electric) claims a range of 150 miles, while the Chevy Bolt claims 238 miles.  The CV-1 at 217 is clearly right there in leading edge of the pack (assuming they're rated with the same tests).  Acceleration from 0-60 in six seconds is good for a family sedan but that's where an electric car should shine.  The car shows it's Fiat 124 heritage, but is also obviously updated: 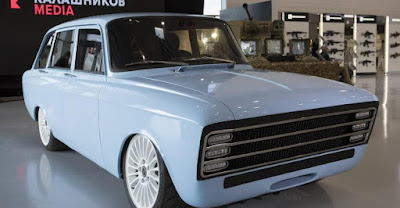 No word on why an electric car needs a front grill like that.  It shouldn't need cooling like an I/C engine.  Perhaps they have a coal fired heater for those famously harsh Russian winters?  An electric heater is probably a really bad idea - it would drastically reduce range.


While engineers generally know better than to make sweeping generalizations and engage in hyperbole, the same does not necessarily apply to press relations departments. To wit:  “This technology will let us stand in the ranks of global electric car producers such as Tesla and be their competitor,” said news agency RIA-Novosti, quoting Kalashnikov's press office. Kalashnikov further said it has developed some cutting-edge elements for its "electric supercar", including a "revolutionary" inverter. No further details on the inverter were provided.

I was surprised to learn that Kalashnikov Concern has been involved with electric vehicles for a while.  Kalashnikov built the electric "Ovum" vehicles that were used by Russian police at the World Cup this summer. The Ovum EV has a modular design and the ability to vary the number of passenger seats depending on the purpose. 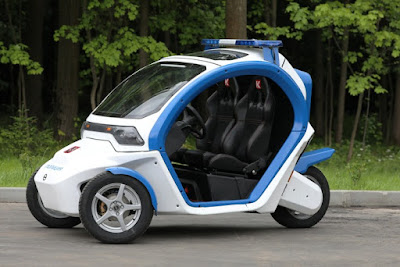 The CV-1 looks like something I can picture Leonid Breshnev getting out of; the Ovum is more modern looking, definitely different.   But, hey, maybe they focus-grouped the heck out of it and the Russians want a car that looks like the CV-1.