Do We Have Security in the Capital, or Kabuki?

My dominant thought when I saw Arizona Flake Jeff Senator cornered by a couple of left wing activists in an elevator is "why is there no security?"  "What did these twits have to do to get into the capital and harangue a senator? "  I can't visit a friend in the hospital without going through metal detectors, emptying my pockets, and getting photographed.  Did they?


The women who confronted Flake were Maria Gallagher and Ana Maria Archila, sexual assault survivors who are now being hailed as activists who may be “changing the course of history.”

Archila, a Queens resident, is the co-executive director at the Center for Popular Democracy (CPD), an organization that works toward creating an “inclusive, equitable society” by advocating for “communities of colour, immigrants, working families, youth, women and the LGBTQ community.”

Gallagher, a New York resident, isn’t linked to the CPD directly, but is “just a passionate person,” the Miami Herald reported.

She had been in Washington for a week demonstrating against Kavanaugh’s nomination. 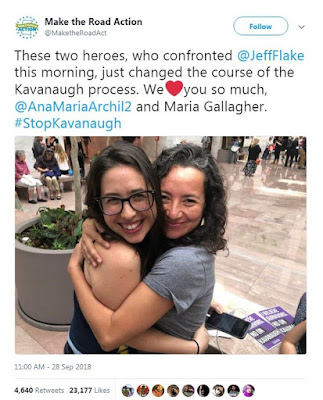 I think these two are too self-centered to do it, but think to yourself what if one of them is wearing a suicide vest?  Get close to the senator and go in blaze of glory?  I always thought the capital was too well protected, but if someone can get that close there are lots of options without firearms or explosives.  Remember when Korean Fat Man Dear Leader Kim Jong Un had his brother assassinated by a girl walking up and wiping nerve agent on his face?  Unless they get body cavity searched, they can get enough VX into the building to do this.

I don't know what kind of security they have, but I suspect it's not as much as they need.  They'll find that out in due time.