As in passing on some details so you can "ketchup" on some things I've been working on.

First off, rev. 1 of the chair repair failed.  As commenter Raven suggested, the epoxy didn't bond well to the plastic.  I mentioned possibly making a small steel or aluminum plate in the original description, so I went with that approach and it's in now place.  I'm working from this chair. 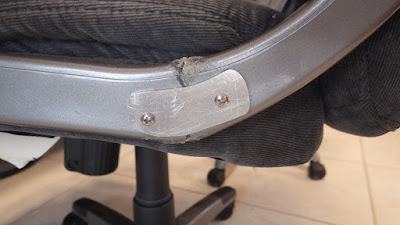 The glue broke pretty much as soon as I applied any pressure to the arm, so this got put into place yesterday.  In addition to the metal plate, I put some superglue (cyanoacrylate) gel into the crack.  That didn't seem to bond well, either.  This fix probably isn't the best way to do it.  There probably should be two holes on each side of the crack, which would make the metal a bit longer.

The other thing I've been working on has been my engine.  It still just won't turn over and keep running on its own.  One of the suggestions last week was to get a higher purity alcohol fuel, with people recommending as close to pure ethanol as I can get without buying 200 proof vodka.  In the US, this is called denatured alcohol, while in much of the English speaking world, it's referred to as methylated spirits.

I was using a brand from the local Home Despot that was branded as "Denatured alcohol", which comes from adding methyl alchohol to the ethyl alcohol to poison it (or "make it undrinkable")   Research showed what I was using to be about a 50/50 mix of ethanol and methanol.  We have four major hardware store chains in town: Home Depot, Lowe's, Ace and True Value; none of them showed they carried anything with higher percentage ethanol.  Although guitar polishing frequently uses lacquer, neither of my usual sources had anything specified.  A bottle from Amazon arrived yesterday.

The bottom line is that the engine tries to turn over but doesn't.  I've put together several troubleshooting videos (such as) in attempt to get comments from other engine modelers, and no one has pointed out anything obviously wrong.  Yet.  Something is causing just enough extra drag to keep this from running.   Flame eaters are kind of notoriously fickle to get run running.   This is the website of a rather "famous modeler" in the Netherlands, who says (autotranslated),


It is my experience that one needs just as much time for well adjusting all the parameters than to build the motor itself. There are several critical parameters that must be adjusted one by one and at the same time to their optimum. The problem is that this adjustments can only be done successfully if the engine motor already tends to go running properly and that is only the case if all these parameters are reasonably close to their optimum; so a somewhat "chicken and egg" story. It may happen that you are changing something, while another parameter is not properly adjusted or created. Then you hit sometimes further afield and that makes you desperate sometimes. But it is also my experience that in situations like this persistence always wins, so one should not be discouraged by all this. With enough patience and systematical approach adjusting the engine is very well possible. Once all parameters are set to their optimum they run merrily and fairly reliable and will amaze especially modellers of steam engines that usually build more "manlike" models like steam engines.