I made a spring out of a discarded guitar string.  It works.  It's actually a spring. 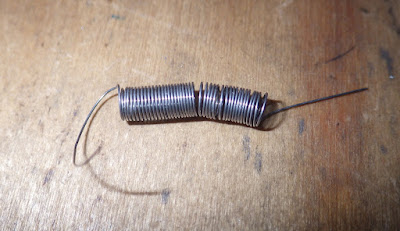 Crooked, ugly and inconsistent spacing, but you can pull it and it springs back.  Unfortunately it's all wrong, because I need it to work in compression, not under tension.  If it was a compression spring, I would have tried it by now.

Let me back up a minute.  As you may have gathered by now, my little engine doesn't run.  Won't turn over and run on its own.  Some troubleshooting on the various fora I belong to said look at that spring (I mentioned it last week) as the source of trouble.

Springs are typically made of what's called music wire.  I ordered a few 3' lengths of wire from an eBay seller last week.  A couple of days later, Mrs. Graybeard says, "what's music wire?" and I launched into a web search.  "Oh, it's a standard type of wire with an ASTM number for it; high carbon and manganese...".  To which she replied, "and how is that different from musical wire used for guitar strings?"  I'm dumbfounded.  Like anyone with a few guitars, I also have a few sets of strings for replacements, and I can "harvest" a used string anytime I feel like it.

Cut to the chase, that's an .013" diameter guitar string.  Bright due to being nickel steel, not black like the music wire will be.  I followed the step by step instructions on Dean's Photographica, and it works, despite the ugly.  I'm still on hold while I wait for the wire I ordered, which is apparently being carried by someone walking from a thousand miles away and won't be here for a while.  And then I'll make it as a compression spring, like it should be.