Strangest Science Story of the Week

A story I got in today's emails that leads with the line that researchers show sharks prefer jazz over other genres.  This website links to Phys.org, the online physics research hub.


Researchers trained baby Port Jackson sharks to associate music with a food reward. When played a jazz song, the sharks learnt to go to a feeding station for a tasty treat.

"Sound is really important for aquatic animals, it travels well under water and fish use it to find food, hiding places and even to communicate," said lead author Catarina Vila-Pouca from the Department of Biological Sciences.

All of which gets off to a good start, but then deals a serious blow to the title in the next line:


Associate Professor Culum Brown of the Department of Biological Sciences and the leader of The Fish Lab said when it came to differentiating between jazz and classical music, the sharks struggled.

"It was obvious that the sharks knew that they had to do something when the classical music was played, but they couldn't figure out that they had to go to a different location," said Associate Professor Brown.

"The task is harder than it sounds, because the sharks had to learn that different locations were associated with a particular genre of music, which was then paired with a food reward. Perhaps with more training they would have figured it out."

The researchers offered a potential reason for a preference for jazz among sharks. When prey is wounded and dying, it gives off a kind-of staccato beat as it flops around. The syncopated rhythms of jazz music actually makes jazz the perfect music for sharks, who relatively easily associated the music with food.  Similarly, in a 2015 study it was found that sharks liked heavy metal, and researchers attributed the rhythms of heavy metal to those sharks liking that form of music.  Heavy metal is unpredictable by design, and largely non-repetitive.


A documentary film crew found that blasting death metal tunes into the water can actually help attract great white sharks. Filming for the Shark Week show “Bride of Jaws,” the Discovery Channel film crew used a military underwater speaker to pump out heavy metal in the sea to try to attract a 4.8 meter (16 foot) shark, awesomely known as “Joan of Shark.” They didn’t attract Joan, however they did entice two others to come up to the boat, one of which was over 4.2 meters (14 feet) long.

No explanation is given for why they chose to pump out "death metal" to attract a female great white shark as opposed to say, Michael Buble' (they are female sharks, after all).   Well, they mention that a few years ago, an Australian shark tour operator, found out AC/DC songs had a similar effect, but that just pushes the questions back one.  Why did they choose AC/DC instead of something mellower?

I find it easier to envision white sharks head-banging in a concert somewhere than sitting around in a smoking robe, swirling a brandy snifter while listening to Thelonious Monk.

Somehow all I can think to wrap this up with is:  Play That Funky Music, Shark Boy. 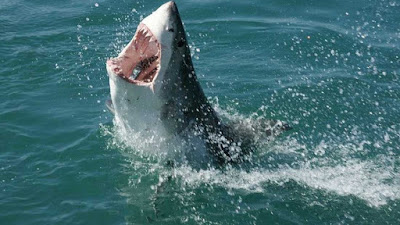