And... It's Still Not Running

Just a note to update you on my progress with my flame eater engine; more correctly, the lack of progress.  It still doesn't run.  I know I've improved it, but still no joy.

There's a well-known engine modeler in the community from the Netherlands: Jan Ridders.  Jan has his own design but has built several others like the one I've built.  He has a web page dedicated to them and talks about getting them running.  One of the observations I've seen somewhere is that it might take as long to get it running as it did to make all the parts, in which case I should be working on this until around Halloween. 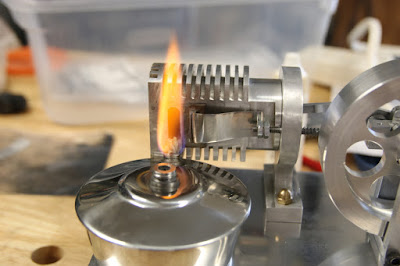 One of the many tests.

Among the things I've done is get some 3' lengths of music wire and wind springs, ordered a higher percentage ethanol version of denatured alcohol than I started with, and worked at minimizing friction.  As I've asked various forum members for help, I've ended up running several tests.  They all say it should be working.

I can't say this is how I spent my weekend.  It's much more than that.  More like the last three weeks.

Still, it's late August (today is August 47th, after all), so there's no problem staying out of the heat to work on the engine.