The Strange Story of the Space Station Air Leak

Last Friday, the International Space Station had an air leak.  Not a serious, "put on your suits or we have minutes to live" kind of leak, but one that would have drained the air out of the station in 14 or 15 days.  Although that article says that a hole was found in the Russian Soyuz capsule that recently docked with the station, the authors speculate that the leak was caused by a micrometeorite.  The leak was fixed with epoxy soaked gauze.  You can call that fiber reinforced plastic if you prefer.

Since then, the Russian space agency Roscosmos has determined that it was a drill hole made while the capsule was being worked on, and have launched a search to identify the person who drilled the hole and find out why they did so.

The hole is the small one being pointed out here.  It has been described as 2mm diameter, and that looks about right.  See those scratches to the right of the hole?  Those are being taken as evidence that the drill "skated" before digging in.  Clearly they wanted to put a hole there, but we're left to speculate why.  Were they working on something else and drilled through it? 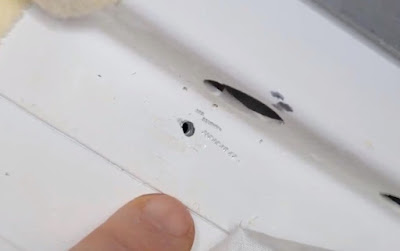 “We are able to narrow down the cause to a technological mistake of a technician. We can see the mark where the drill bit slid along the surface of the hull,” Dmitry Rogozin, head of the Russian space agency Roscosmos, told RIA Novosti. (A translation of the Russian articles in this story was provided to Ars by Robinson Mitchell). “We want to find out the full name of who is at fault—and we will.”

Over the weekend there were initial reports that Rogozin or someone thought this was sabotage, and even talked about it being "the crew" (translation, "those Americans") and how they get burned out being in space so long.  If it was deliberate, it was laughably incompetent sabotage.  The problem was found and fixed rather quickly.  This looks more like someone made a mistake and tried to hide it rather than report it for a proper fix.  The only thing that doesn't go is just why there's any hole there at all.


“I have conducted investigations of all kinds of spacecraft, and after landing, we discovered a hole drilled completely through the hull of a re-entry module," the former Energia employee, Viktor Minenko, said in Gazeta.RU. "But the technician didn't report the defect to anyone but sealed up the hole with epoxy. We found the person, and after a commotion he was terminated,” said Minenko.

In this case, the technician used glue instead of epoxy. As the Soyuz hull is made from an aluminum alloy, it could have been properly repaired on Earth by welding, had the technician reported the mistake.

Someone in the Soyuz facility is going to be nervous about their continued employment.   From the bigger picture, if workers who make mistakes on manned spacecraft are afraid to report a mistake and do this sort of amateurish fix, that's a seriously broken company and you don't want them working on manned spacecraft.

I have no idea where this hole is located on the Soyuz capsule, but marks like that don't come from drilling with a drill press, they come from a handheld drill and poor shop practices.  Even a portable drill should be able to drill without the skate marks if the tech started with a center drill and then moved to the 2mm bit.