The Psychologist Listens, Nods, and Simply Writes, "FN" in His Notebook.

Remember the story last week about the professor who shot himself in the arm at the College of Southern Nevada, left a $100 bill taped to the mirror as an apology to the janitor that had to clean up the bloody mess he left, and said it was all because of Trump?

It just got weirder.  This guy is FN. 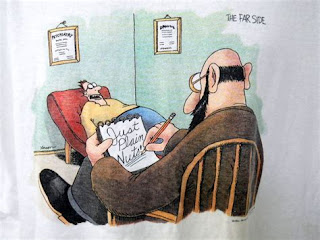 Gary Larson, The Far Side.  Yeah, Gary didn't write it as "FN", it just seemed to work for me.

It comes out today just how much weirder it has gotten.  The professor, Mark Bird, emeritus (retired) professor of Sociology at CSN has a whole agenda, now that he has gotten the nation's attention (or thinks he has).   The guy who took a gun into a gun free zone, violating a handful of laws, and shot himself with that gun did it to argue for ... (wait for it)... gun control.  Oh, and to end world hunger.  Shooting yourself in the arm ought to do a lot for that, Skippy; um... Professor Skippy.


I sincerely apologize for my behavior today. I was motivated by multiple reasons. A major reason is, derivative of the following October 20, 2017 CBS news story, the Earth had roughly 100 million malnutrition and pollution deaths in the past decade — and the Earth is on a course for at least another 100 million such deaths in the next decade. One hundred million deaths are more than all the military and civilian deaths of [World War II].

A less significant motivation relates to the October 1, 2017 Las Vegas mass shooting from the Mandalay Hotel that killed 58 people. Since this incident, there has been no national legislation banning bump stocks, banning civilian ownership of AR-15 type assault weapons, and the passage of universal gun background checks legislation. Apparently it is about as easy to buy an AR-15 as a 2-shot [D]erringer.

I have sent a longer essay on my motivations to Clark County District Attorney Steve Wolfson and others.

Professor Skippy is a Sociology professor but apparently not what I would consider particularly adept at math, or at the facts he cares about.  The reality is that yes, we all think people starving to death is bad and we'd like to prevent malnutrition deaths, but everything he talks about is already the best in history, or close to the best.  In particular, starvation due to poverty and lack of food has been in a decline for at least 30 years.  Yes, the last year or two has seen a small uptick in the Global number of People Who Are Malnourished, but my guess is that the population in some areas is increasing faster than the ability to get food into those places - primarily all in Africa.  Data thanks to Our World in Data.

In what is often talked about as one of the most ironic problems in history, the world's leading nutrition problem is shifting from starvation to obesity.

As for pollution, professor Skippy is old enough to remember the 1960s/1970s.  I can't imagine anyone alive thinking our pollution is worse now than it was then.

I'm sure shooting yourself in the arm with a .22 derringer will get lots of folks to look at that, Skippy.

Oh, and I don't need to remind this audience that one crime in human history involved a bump stock, and despite that the federal rule making process to outlaw them is going forward.  I expect that will happen.  Assuming he shot out his brachial artery and died, or damaged a nerve so that he lost use of that arm (or lost the arm), over what looks like a law that's being railroaded through, that's goes beyond plain FN to Stupid FN.  Banning ARs and "universal background checks" is just a Bloomberg/Demanding Mommies wet dream, and I bet the only reason he said any of that was it was some catchy words he could remember.   (This is where the next fight is shaping up to be, though.)