The first of the new generation of Global Positioning System satellites has arrived at the Cape Canaveral Air Force Station from its factory at Lockheed Martin near Denver, Colorado.  The satellites are intended to eventually replace the existing second generation GPS constellation, which is now widely used in commercial and military applications.

Known more technically as GPS Block IIIA, the 10 satellites are the first segment of what will eventually replace the current constellation of 24 GPS satellites.  Microwaves & RF Magazine reports a bit on the technical advances coming in Block IIIA.

The GPS III satellite will also be the first space vehicle to broadcast the new L1C civilian signals. The L1C signals, which are shared by other international global navigation satellite systems such as Galileo, is expected to improve connectivity for commercial and civilian users.

Wikipedia has more technical details on the new satellites than the technical trade magazine does, at least in the article linked to above.  Wiki says that the last of the 10 Block IIIA satellites is currently scheduled for launch in the second quarter of 2023, five years from now.  Finally, they say the new L1C signal (and presumably the others) won't be fully operational until all 24 GPS Block III satellites are operational, currently projected for the late 2020s.  The companies that produce the single chip GPS receivers (such as...) embedded in phones and so much more have a little while to start producing receivers capable of these newer modes. 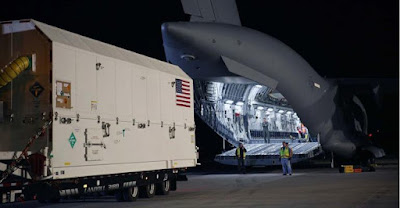 (The first of the block III satellites, GPS III SV01, and a C-17.  Is it being loaded or unloaded?  Arriving CCAFS or departing Colorado?  You decide.  Lock Mart photo).